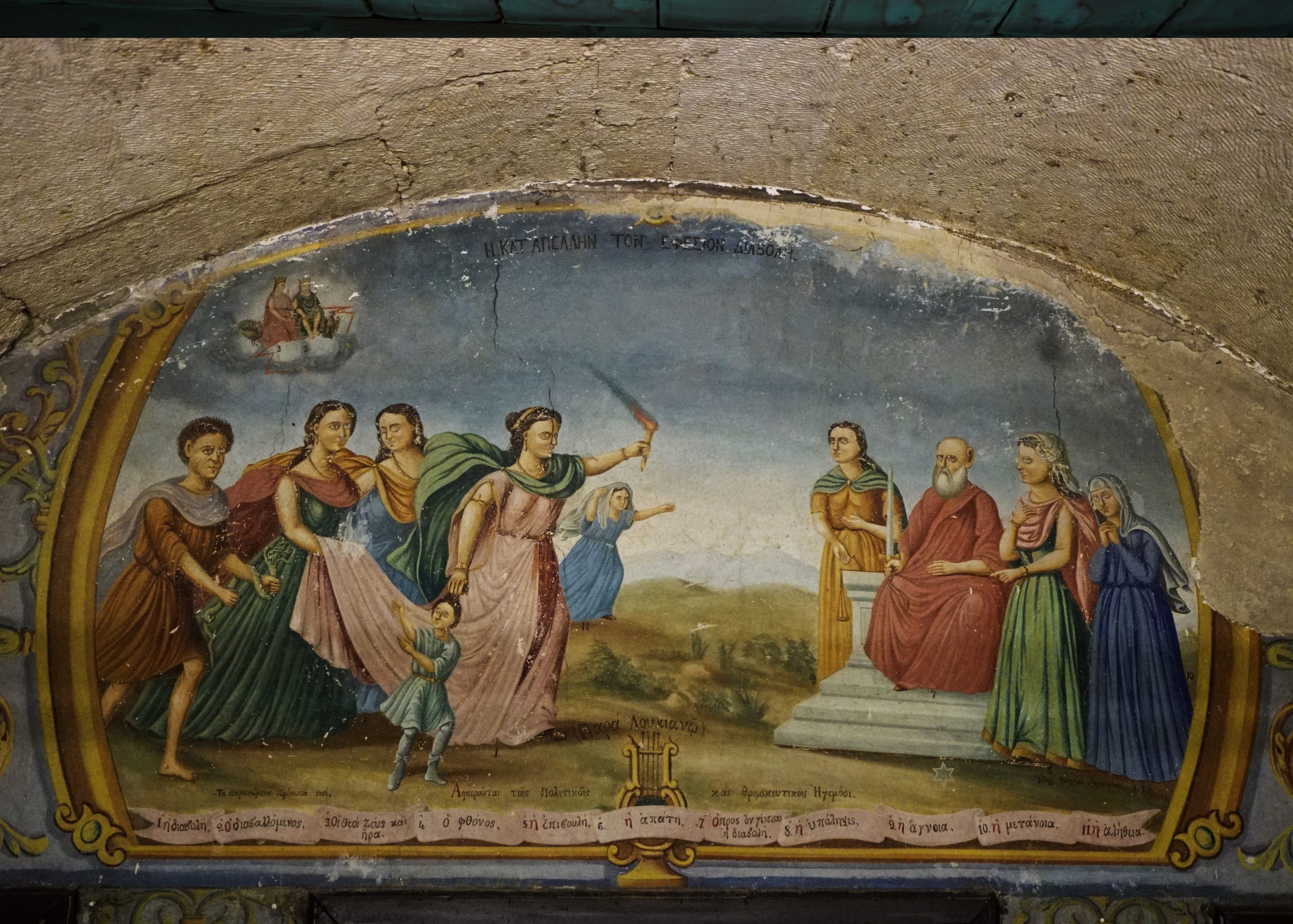 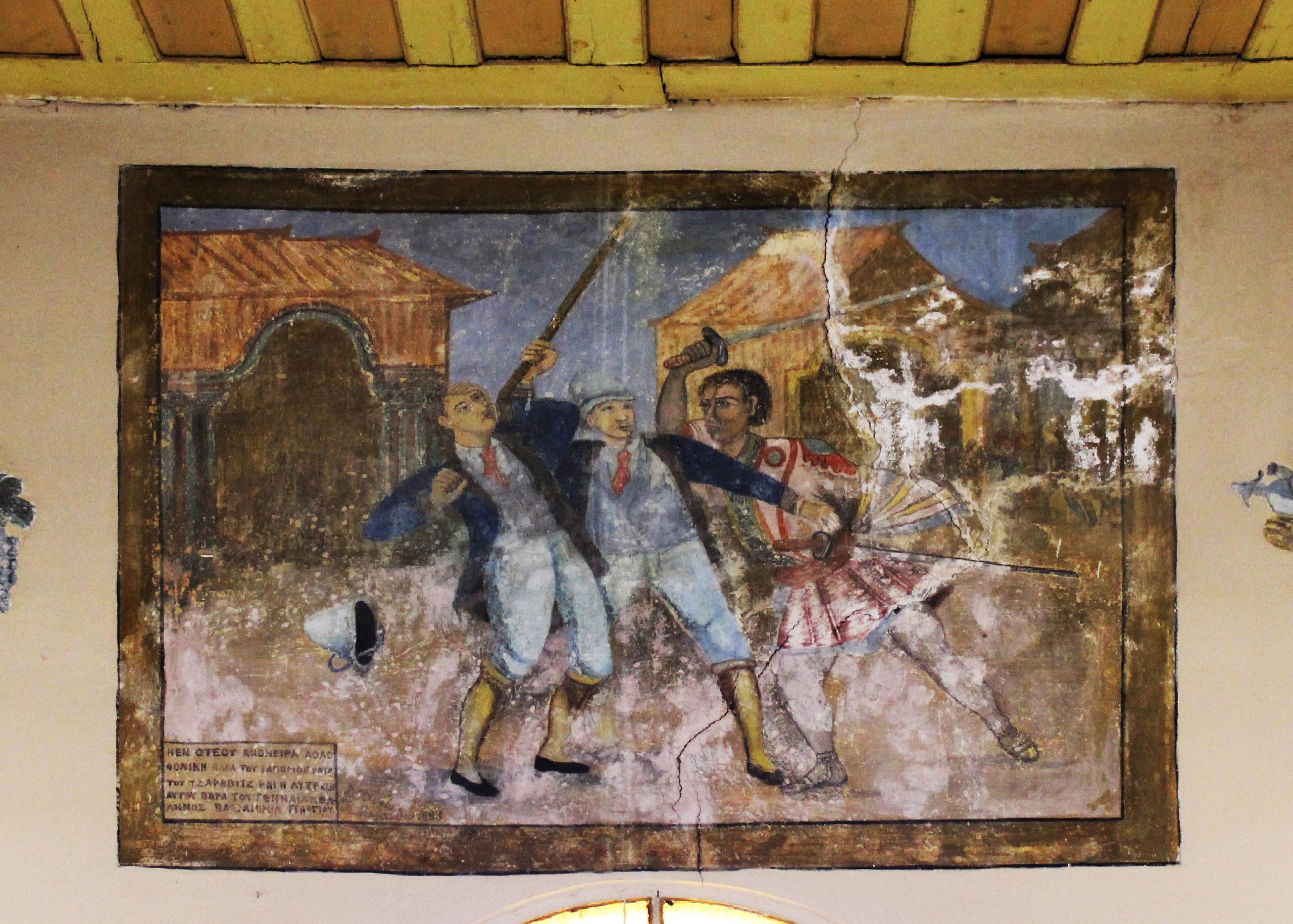 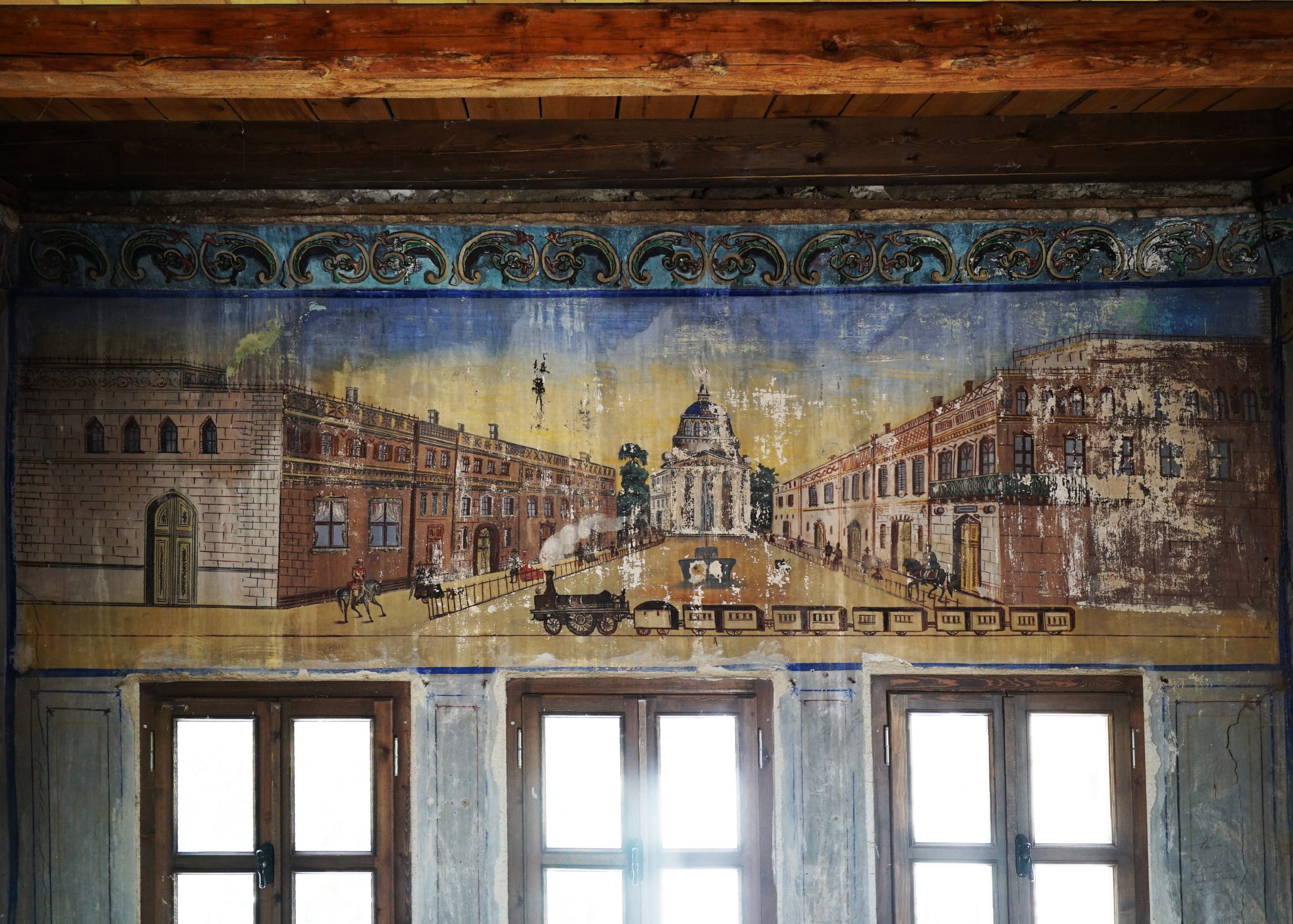 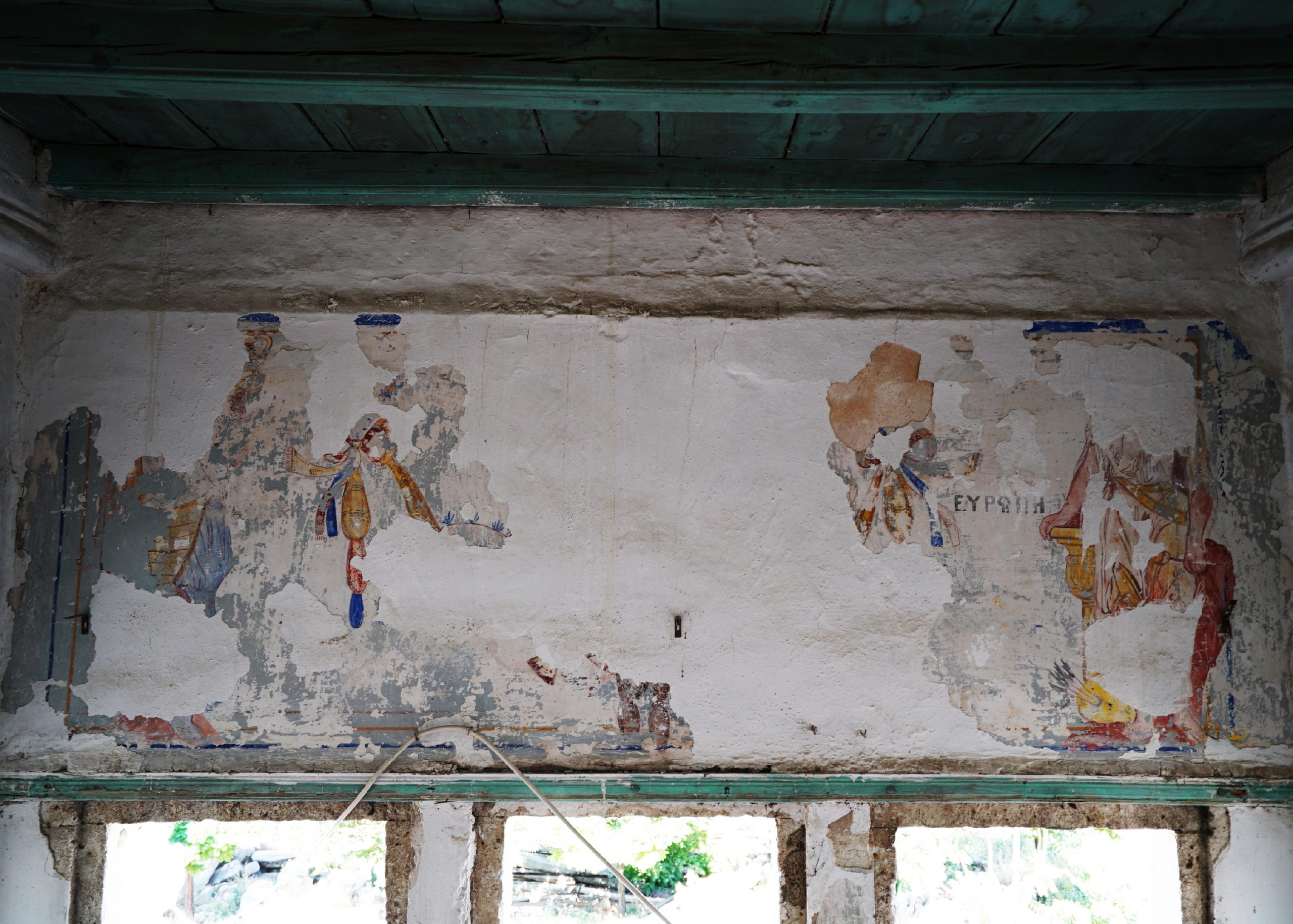 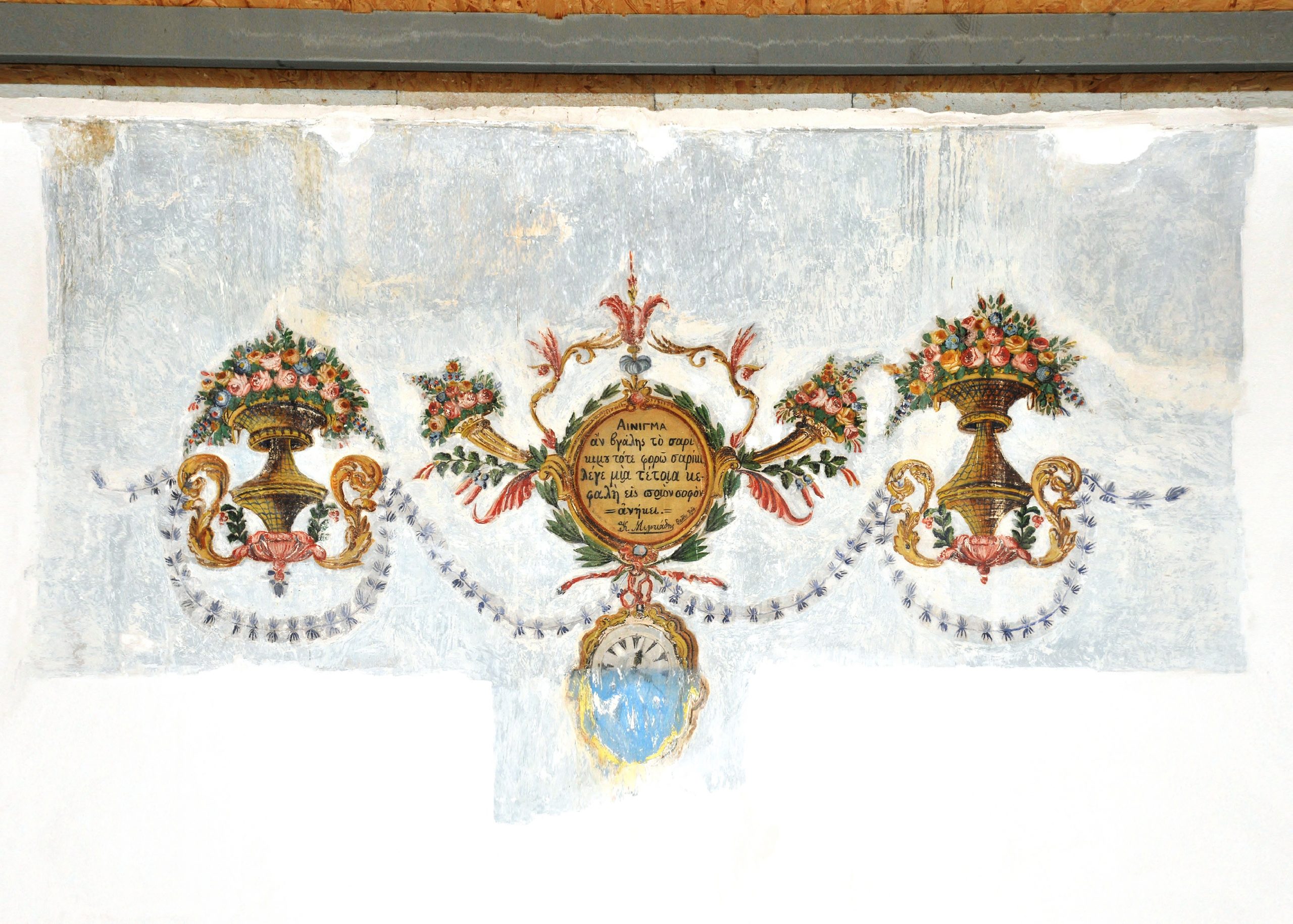 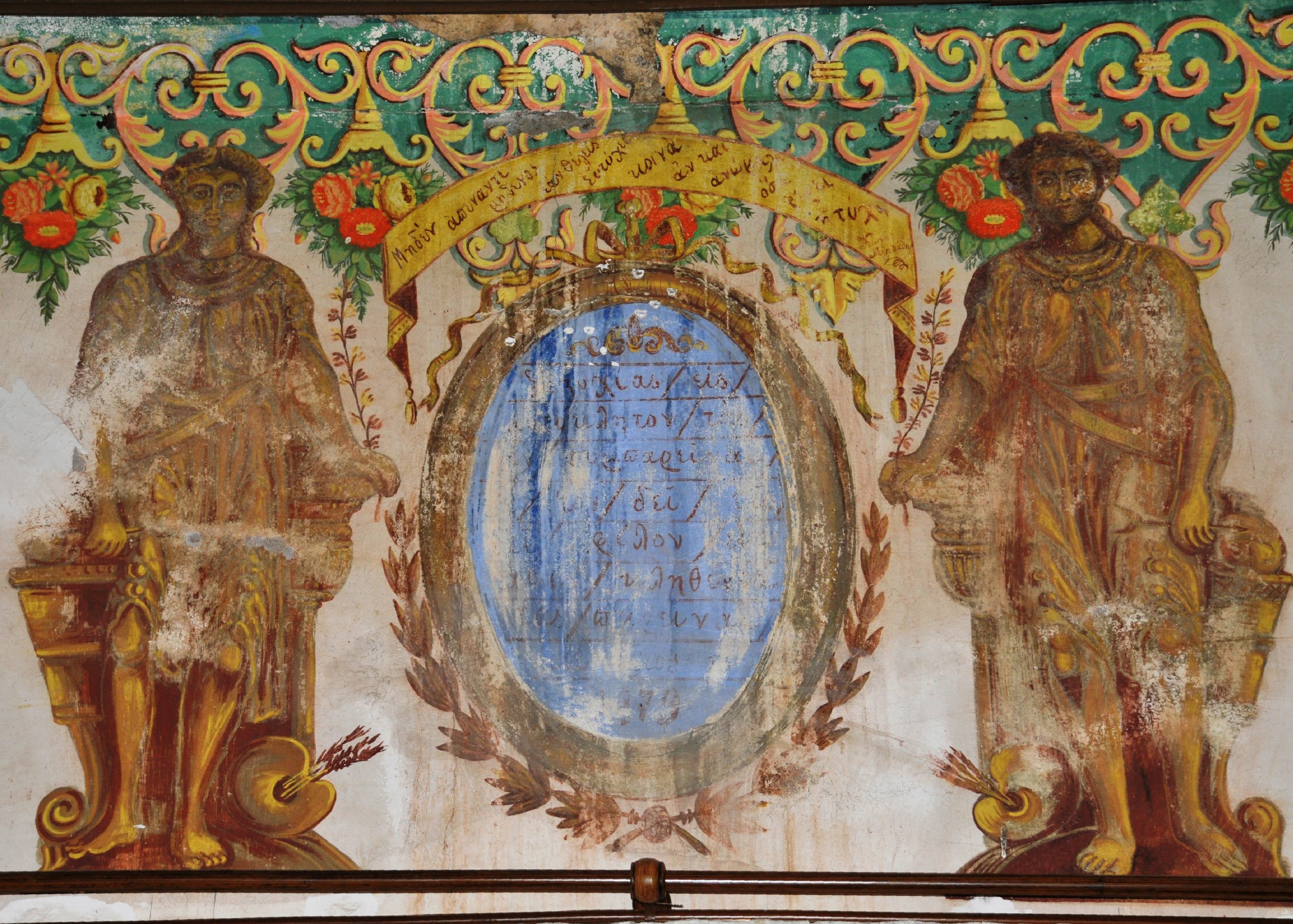 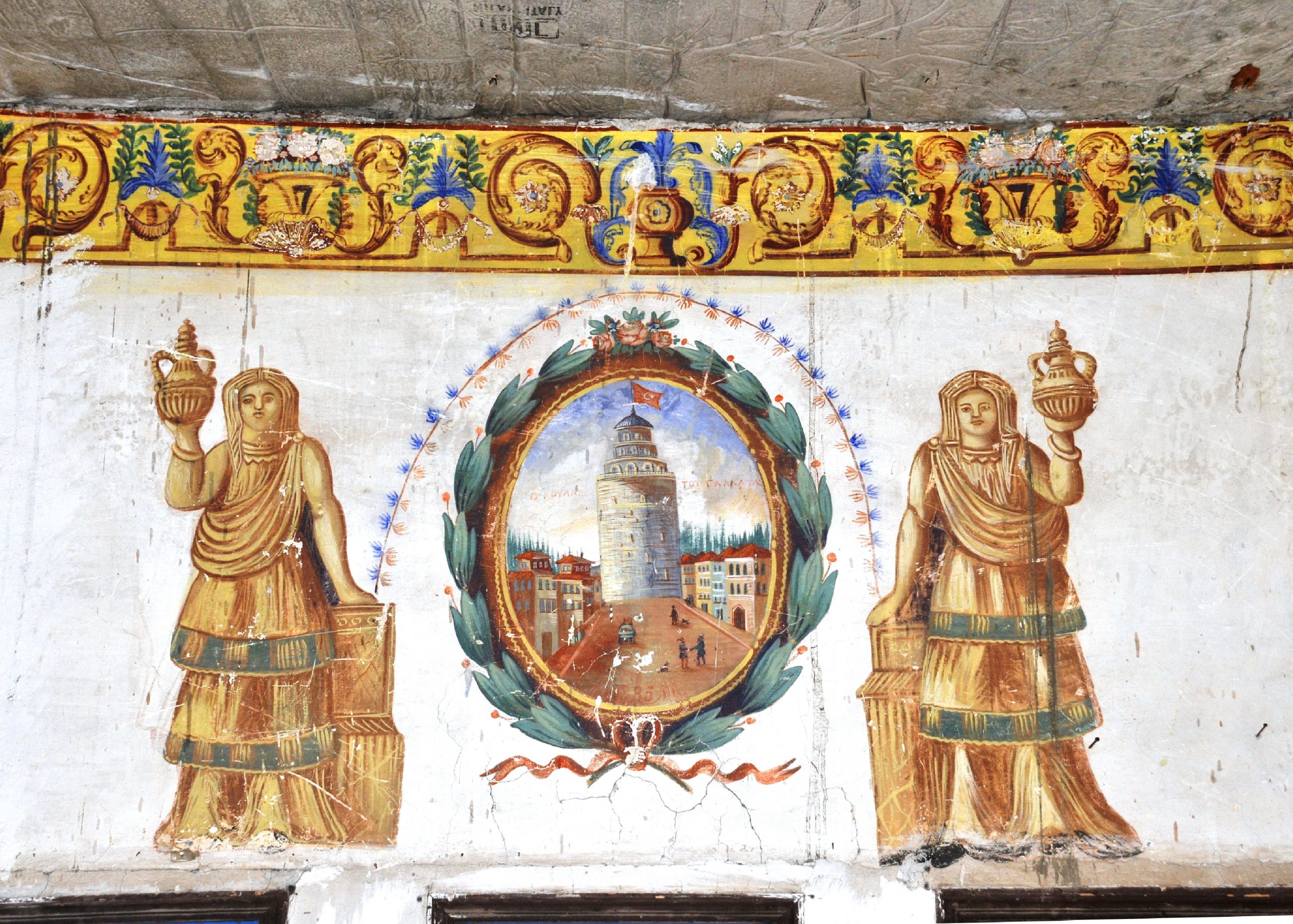 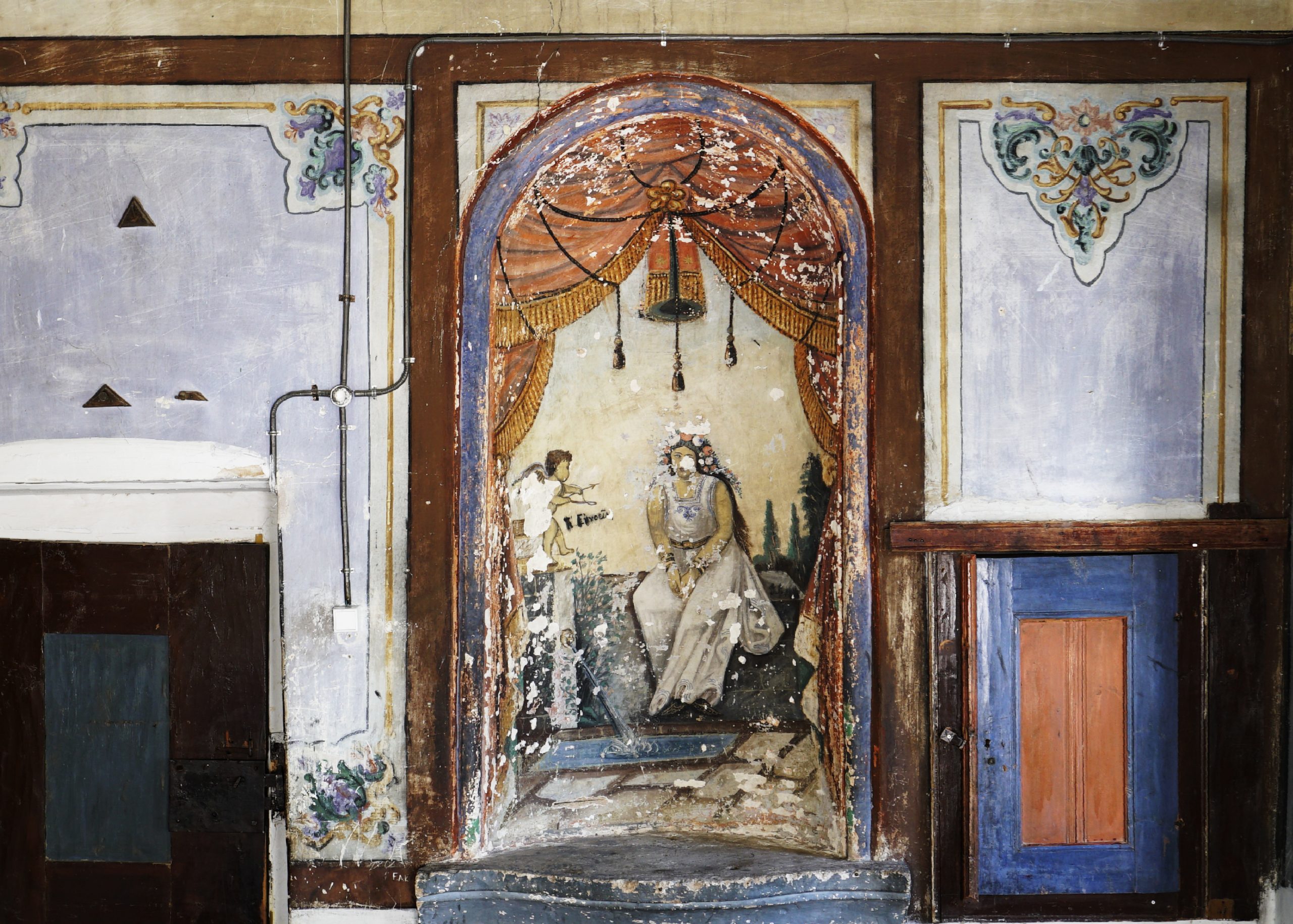 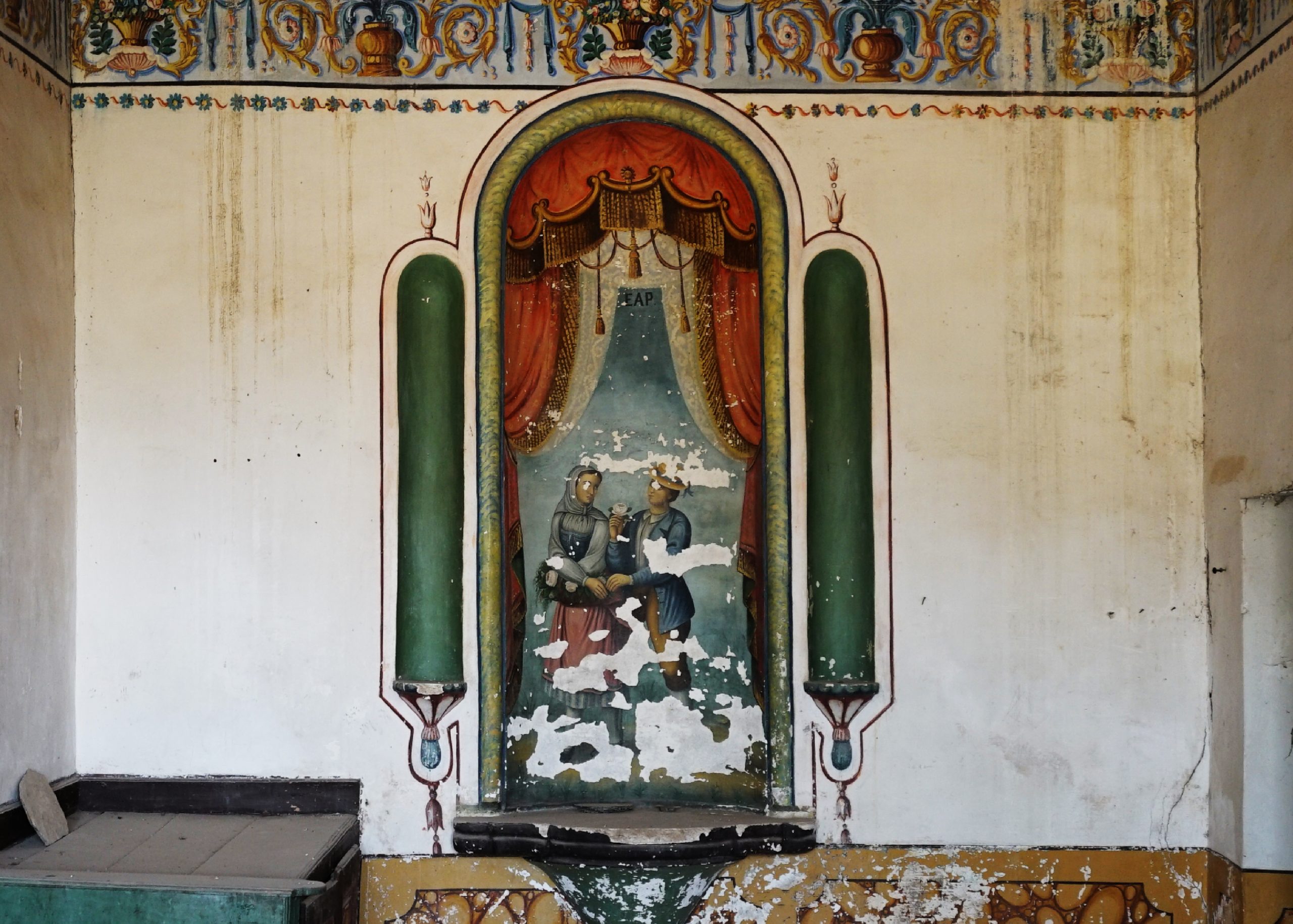 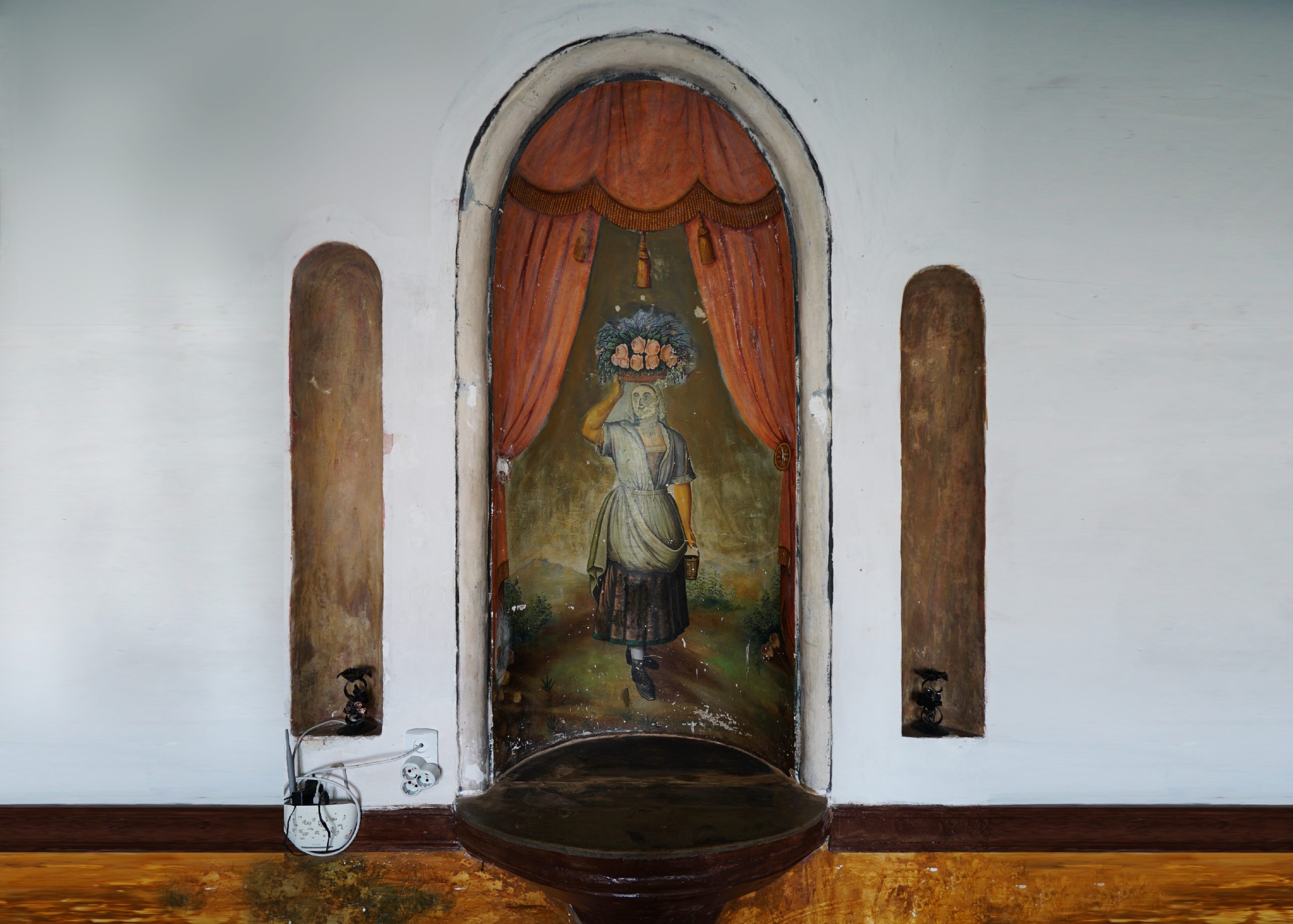 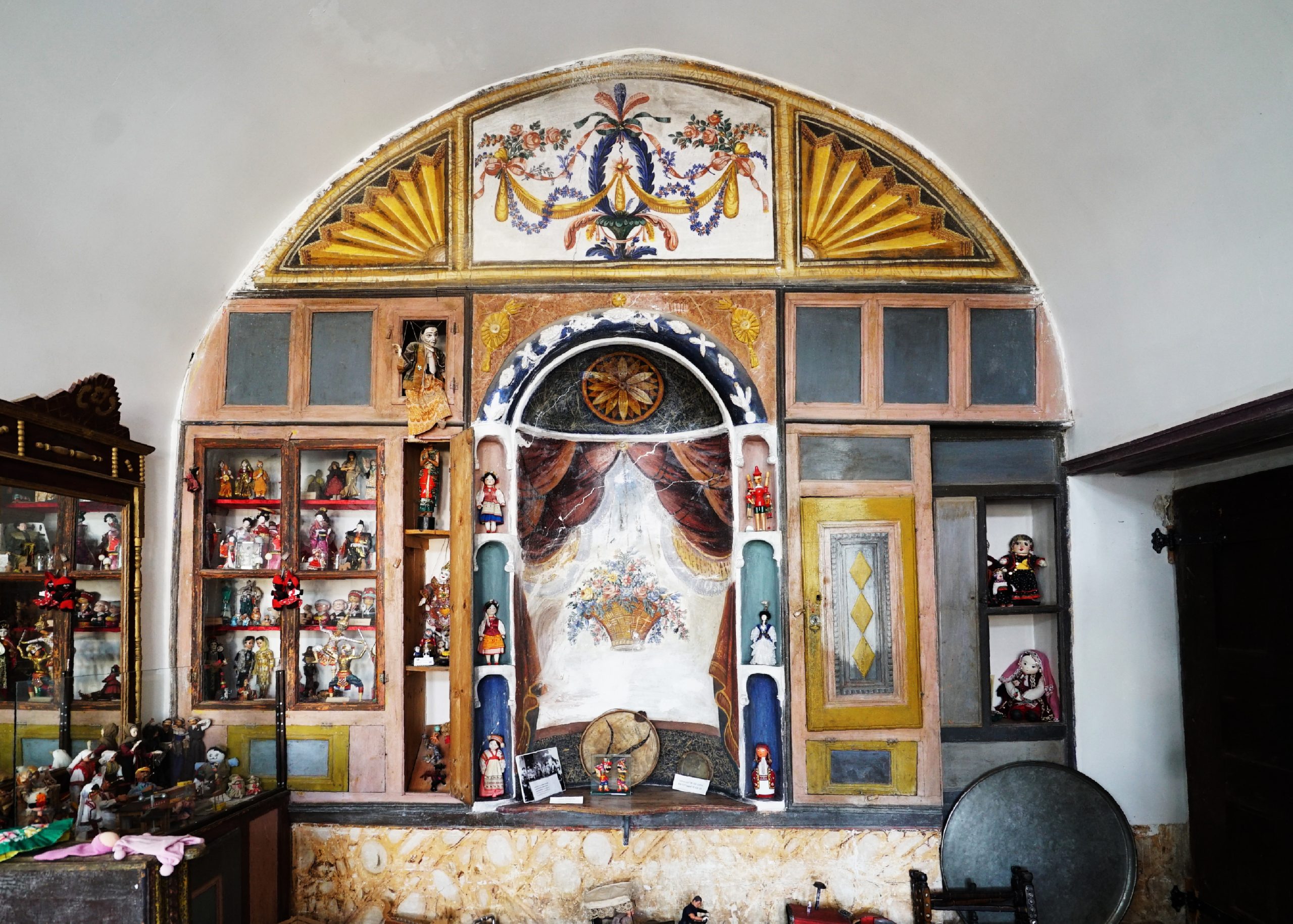 In addition to the architectural qualities of the houses built in Sinasos in late Ottoman period, another remarkable feature of them is; fireplaces, cupboards, ceiling roses, architectural plastic ornaments consisting of various motifs and wall paintings. Such decorative elements in the houses add an aesthetic identity to the space and at the same time give an idea about the worldview taste and wealth of the owner. Undoubtedly, we get this idea mostly through the murals.

When we have a brief look at the modernization process of Ottoman painting art before looking at the murals in Mustafapasa, many of which are in the mansions, we see that Ottoman painting art entered a new process from the second quarter of the 18th century. The depiction of pictures has been limited to pages of texts of the manuscript boks, for the purpose of explanation until this period. The change that started with the Tulip Period and then came with the European-style education approach was also reflected in daily life, and the effects of this situation were also seen in Ottoman painting art. There has been an increase in the number of civil architectural works, especially in Istanbul, and a new decoration such as wall paintings has been observed in the interior ornaments of these works (Renda, 2002). There are examples of murals in Nevsehir and its surroundings in many houses, especially Urgup and Mustafapasa in 19th-20th century.

Wall Paintings in Mansions in Mustafapaşa

It is noteworthy that the wall paintings in the houses in Mustafapaşa have characteristics close to the western style. Many of the pictures appear to be products of high quality craftsmanship, as well as knowledge. Perspective rules were applied and chiaroscuro  technique was tried to be given in most of the paintings that appear in diversity such as panoramic landscape (real or imaginary), figures in the landscape, single figures, and scenes with mythological themes.

When we observe Ottoman wall paintings in general made in this period, it is seen that majority of them are landscape paintings, and the figurative expressions are much less, and they are mostly given as spots in the landscape without going into too much detail. However, the examples of Mustafapaşa especially with the figures are noted that they are rendered both as portraits only and both as depictions in a narrative and in a landscape.

We also find out regarding the materials of the paintings in the village that the paint and other materials in the wall paintings were brought from the Ottoman capital, Istanbul. The Greeks of Sinasos had also been playing a leading role in trade of dye in Istanbul since 1800s. Kayseri, located close to Mustafapasa, also had a small-scale paint production industry, but it is stated that it was not strong enough to compete with Synasos merchants (Roides, 1986).

Another feature of the wall paintings in the village is that the name of the person painting the pictures is often mentioned. The murals of many houses in the village have the signature of Kostis Meletiadis, one of the most important painters in the village. There is information in the manuscripts of Rizos that Meletiadis, who was also a very good clarinetist, went to Italy and received training there while he was working at a caviar shop in Unkapanı in Istanbul. Roides, in his work on the houses in Sinasos, states that the European influence on the wall paintings in the mansions may be related to Meletiadis.

Another painter, active in the village during the Ottoman period, about whom we have much less information, is Georgios. It is stated that the painter in question paints saints and is a master of icons, while Meletiadis mostly likes to paint landscapes (Balta, 2005; Roides, 1986). This painter, whose name we come across on the wall paintings of some houses and some churches in the surrounding area, must be Georgios Iordanidis.

Apart from these private residences in the village, we also see murals painted to churches or monasteries (e.g. St. Basileios Church in Beydere). However, it is necessary to evaluate these two branches separately, especially in terms of purpose, content and source, since the pictures in the civil architectural examples and the pictures in religious structures differ greatly from each other. Monumental examples of religious architecture followed a different development line than civilian examples.