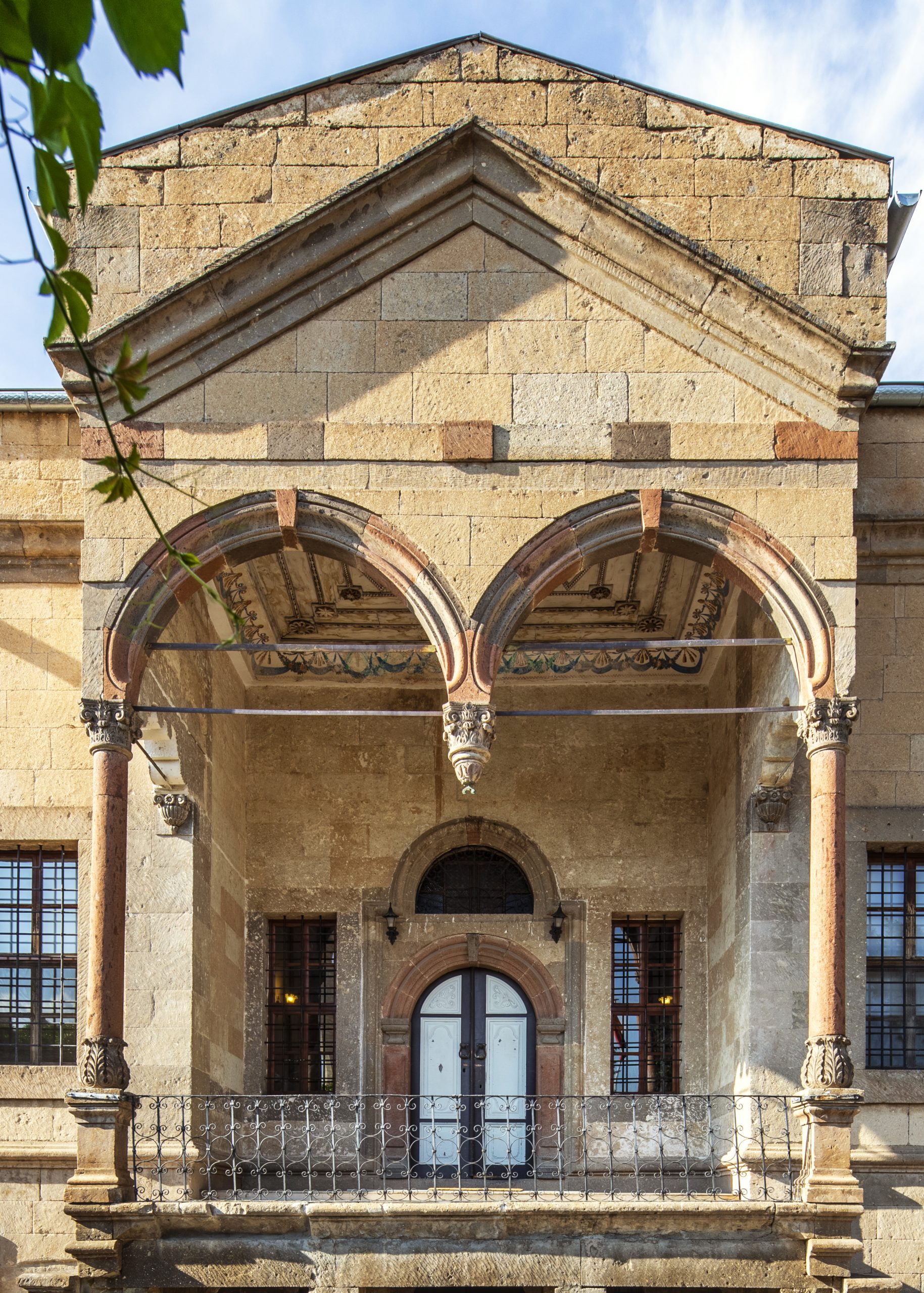 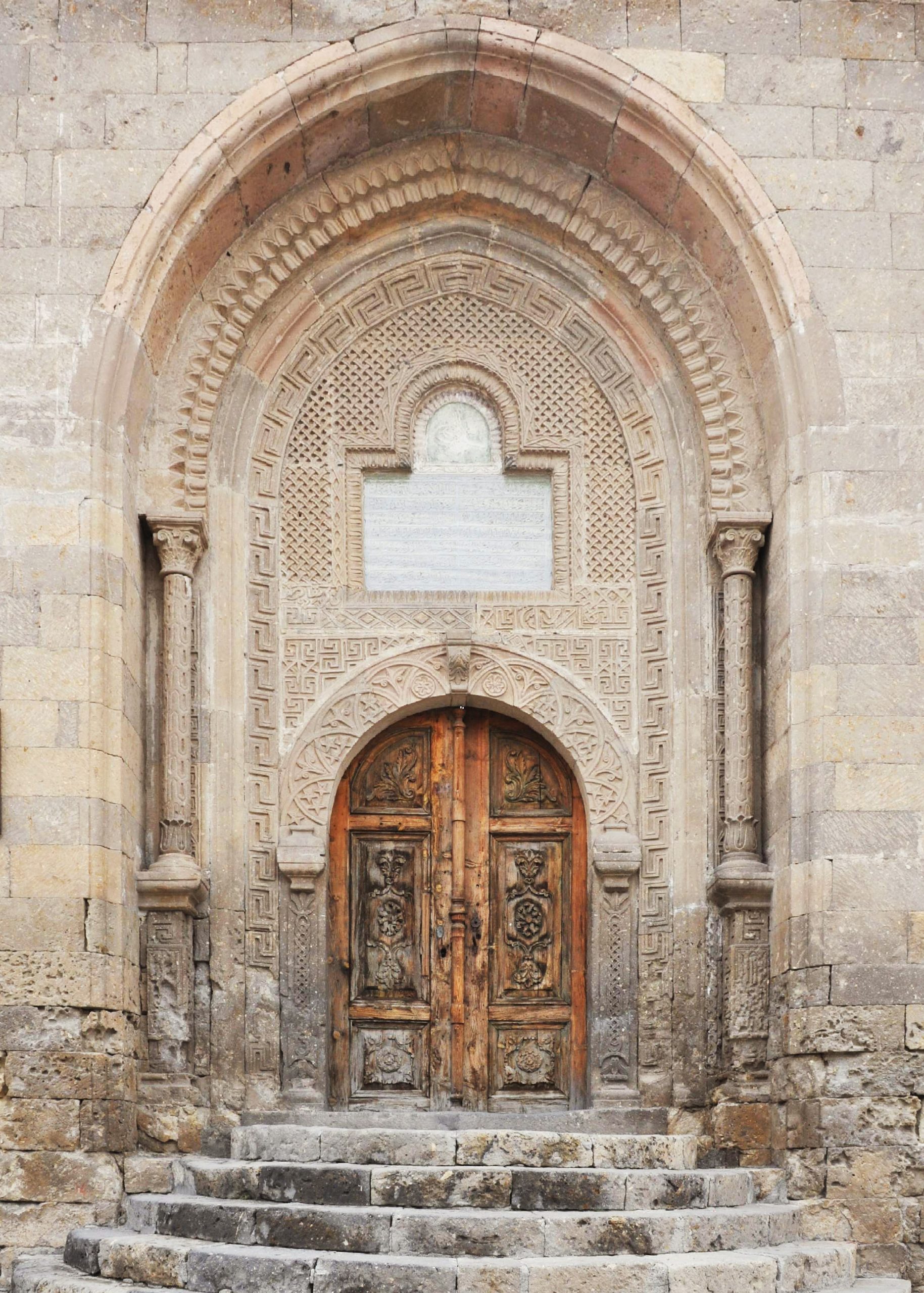 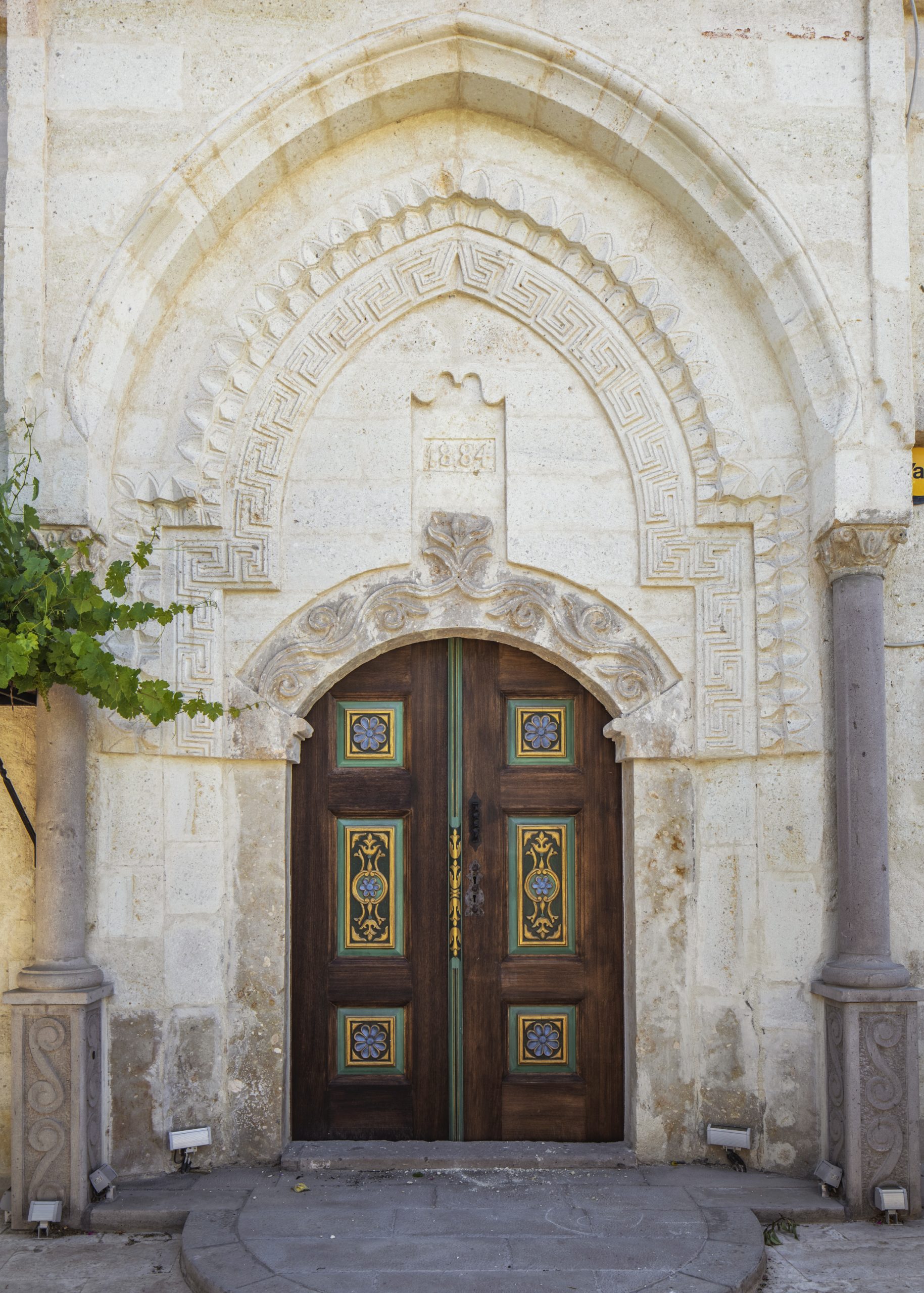 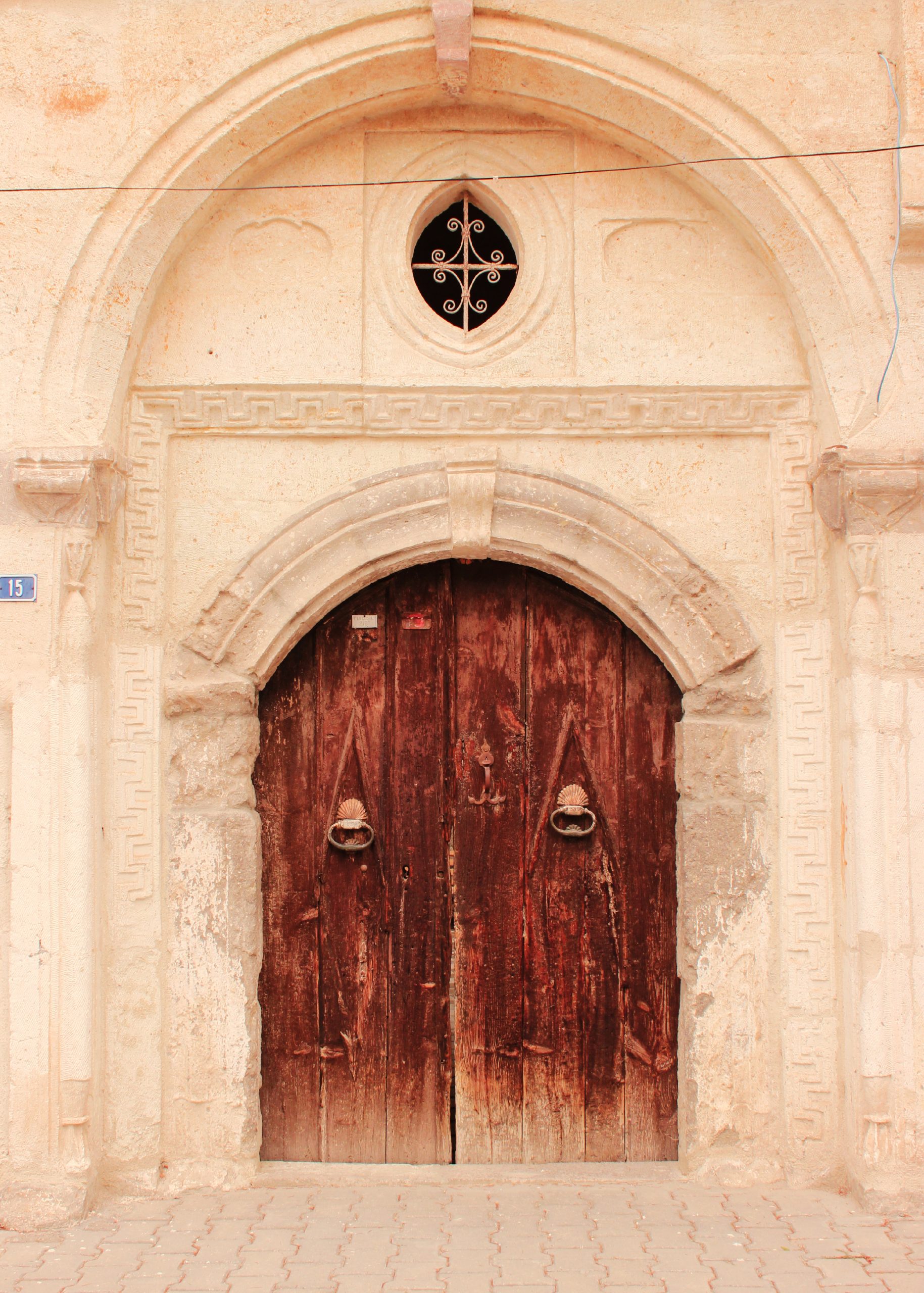 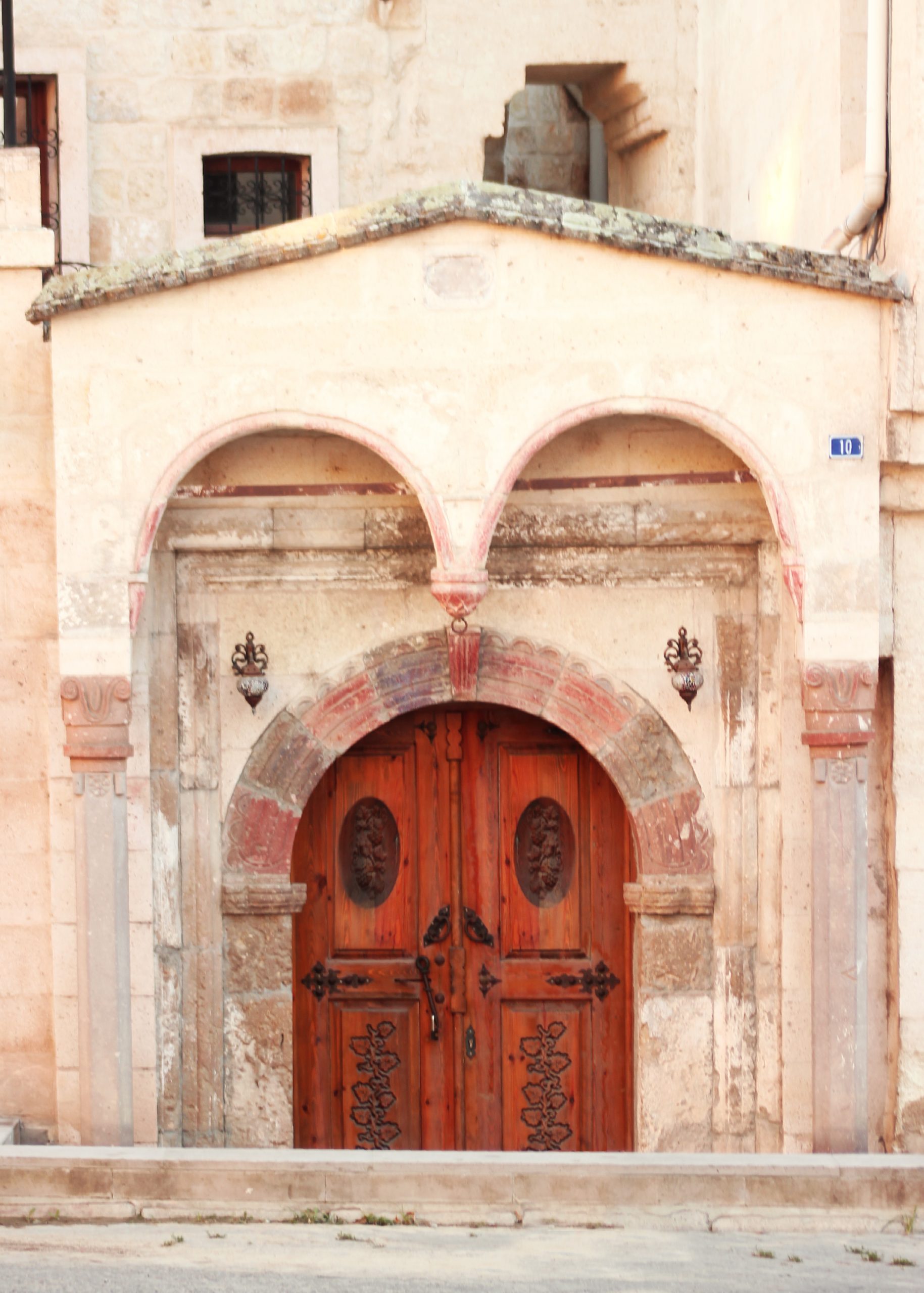 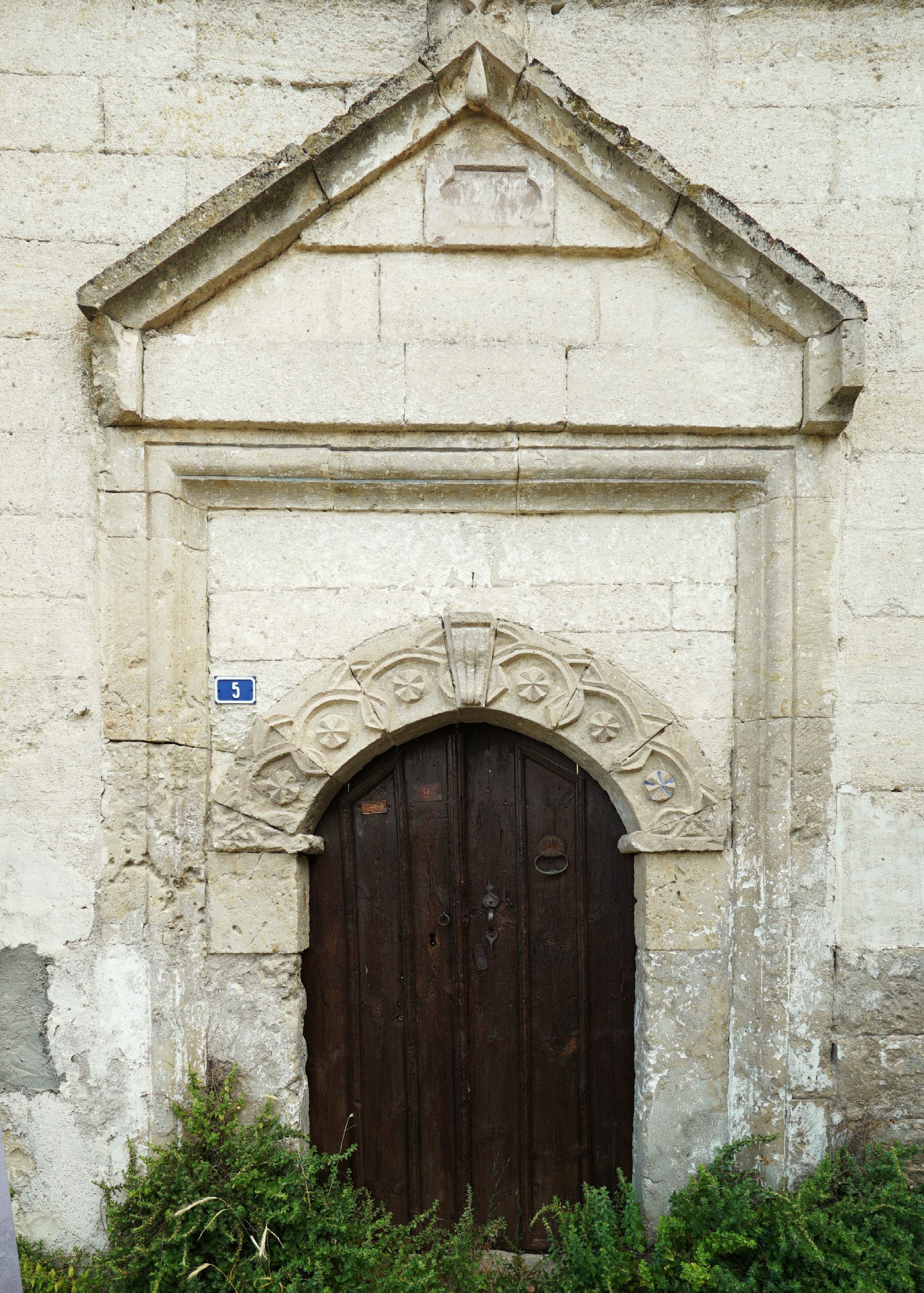 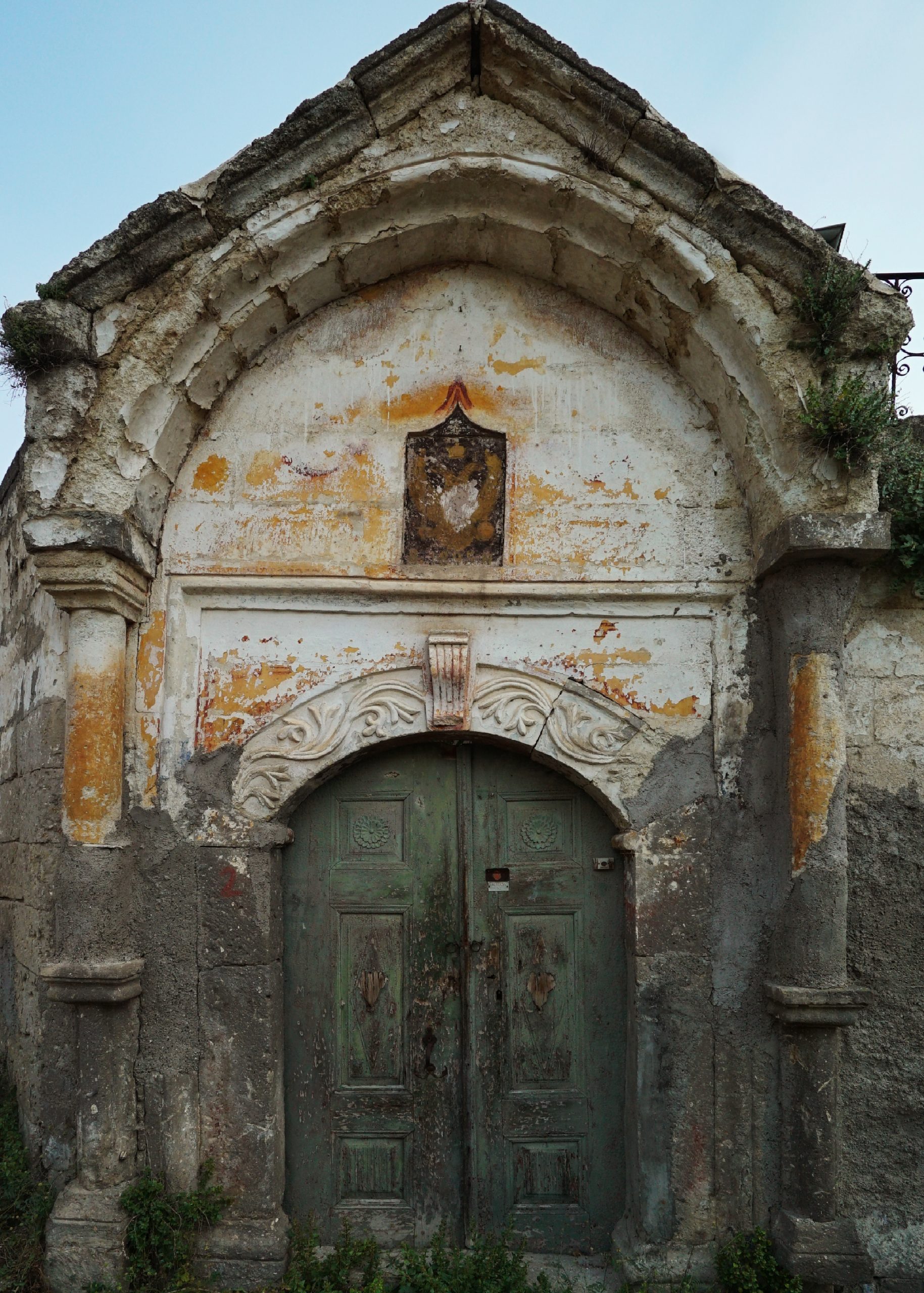 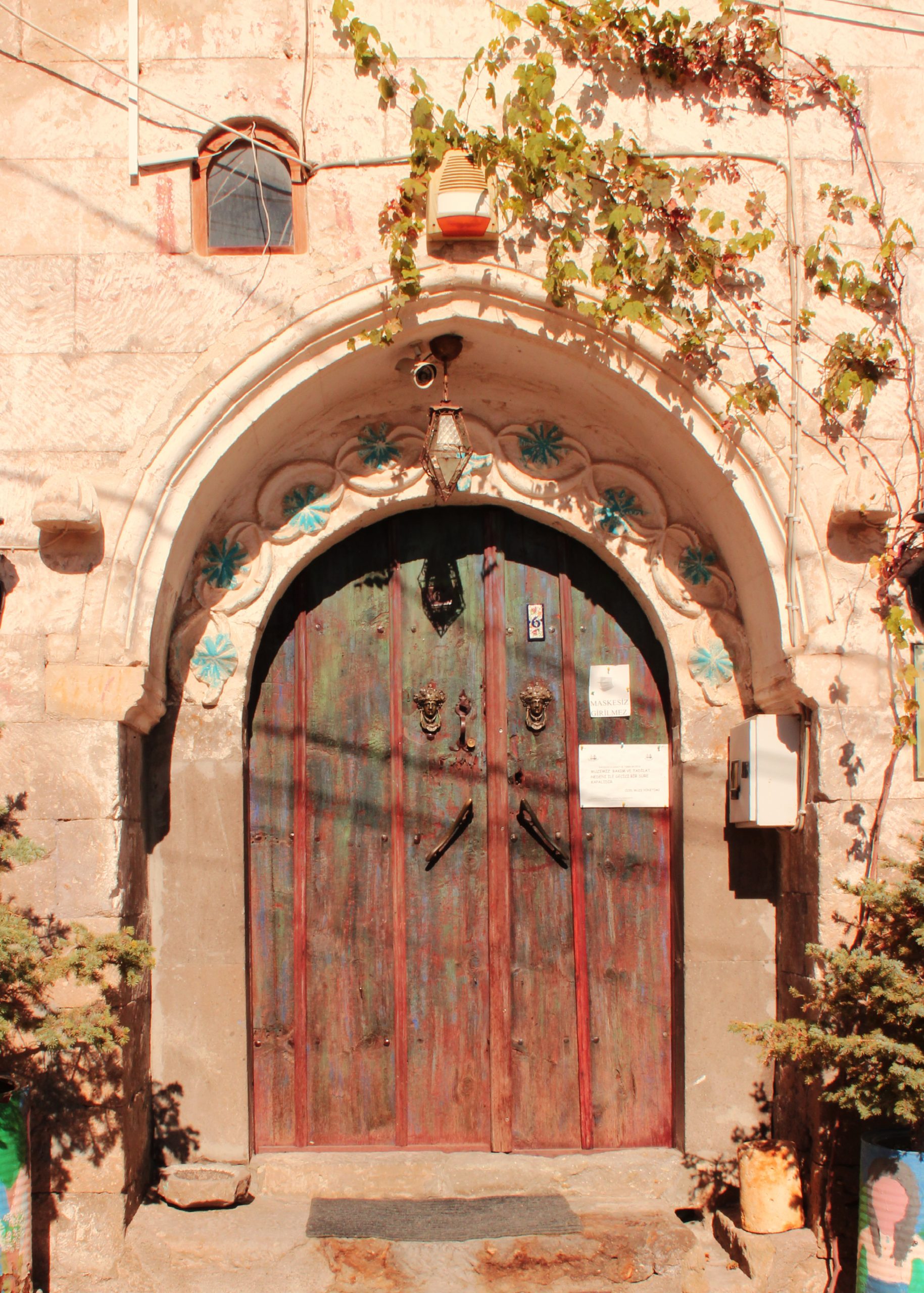 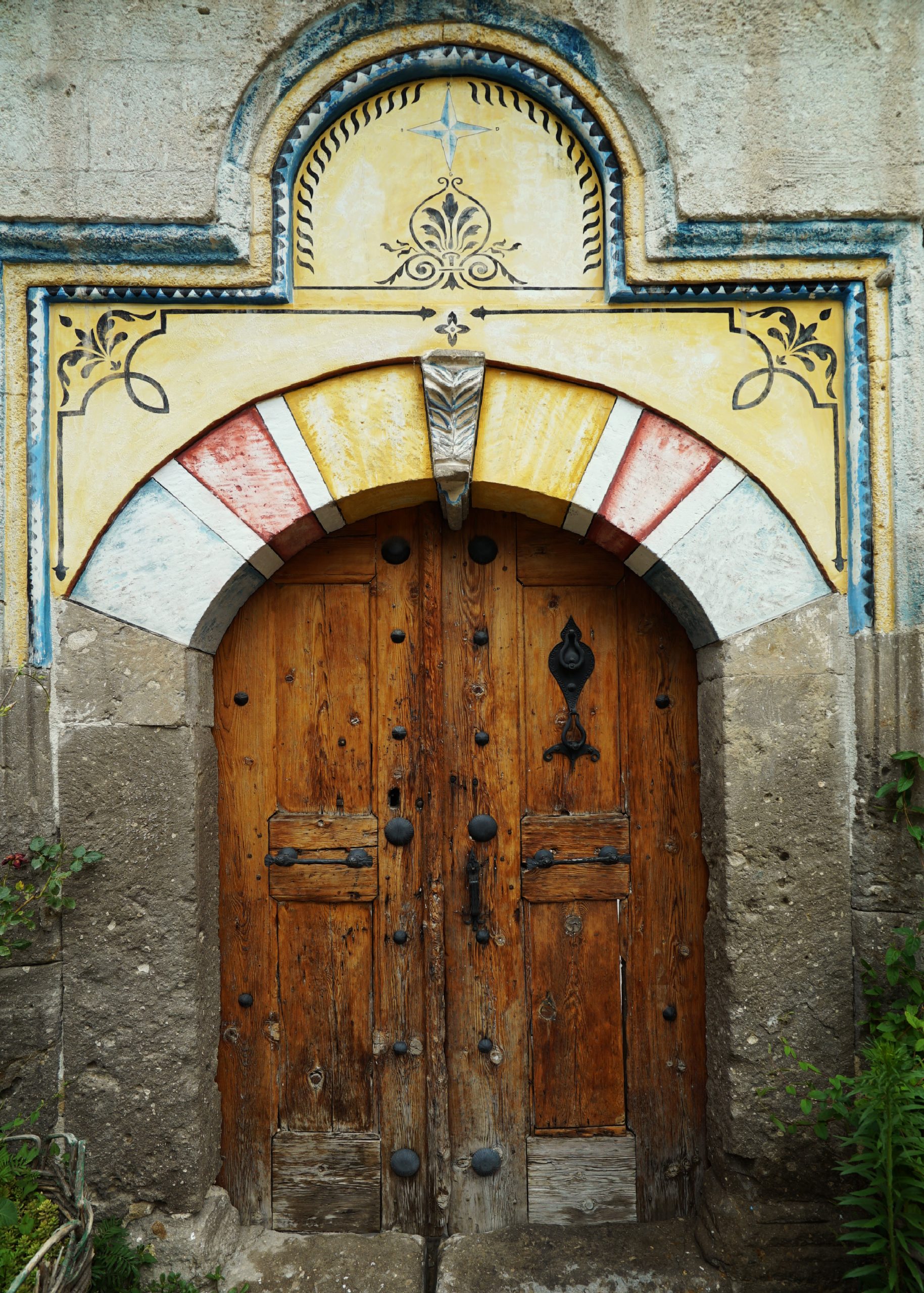 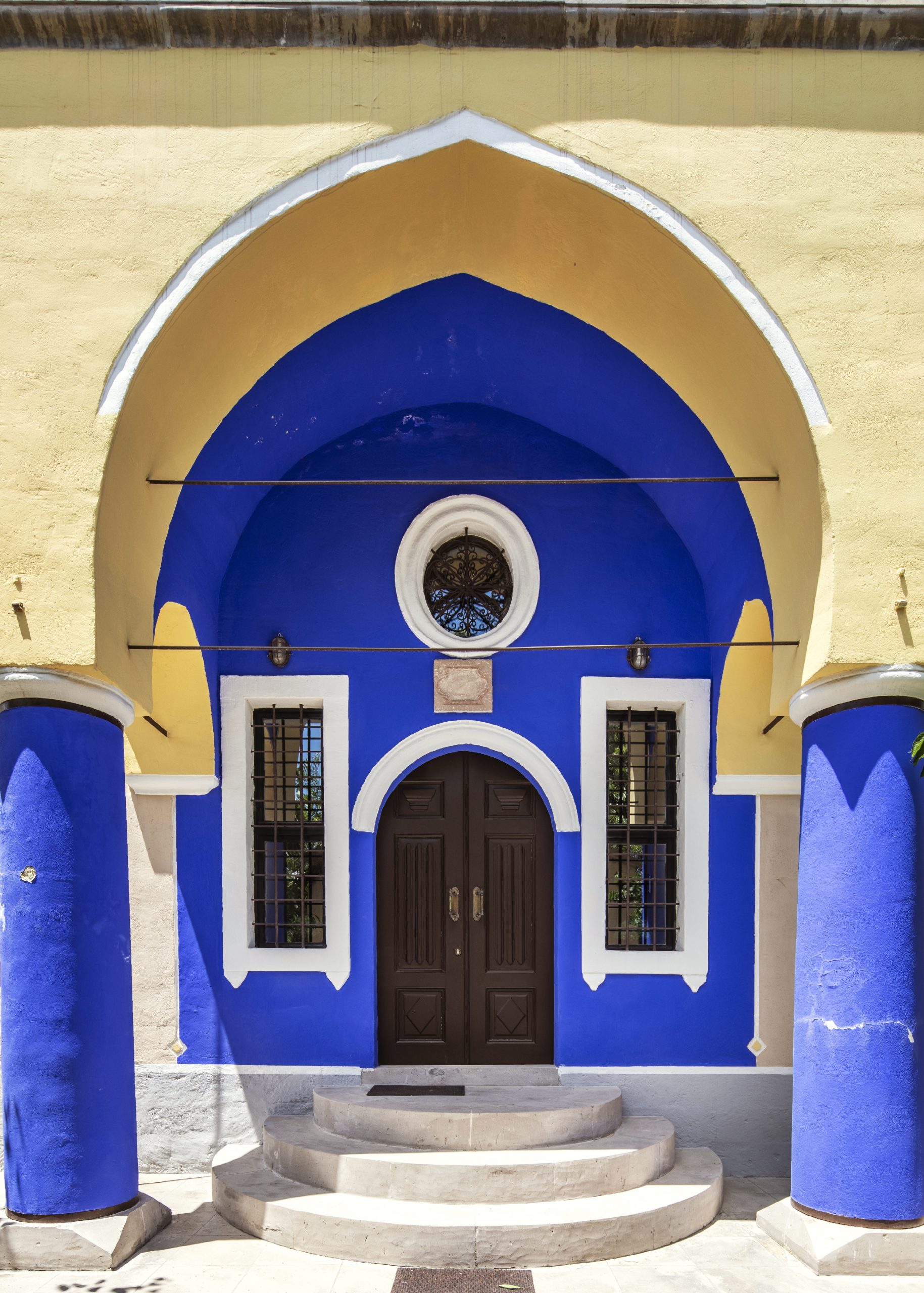 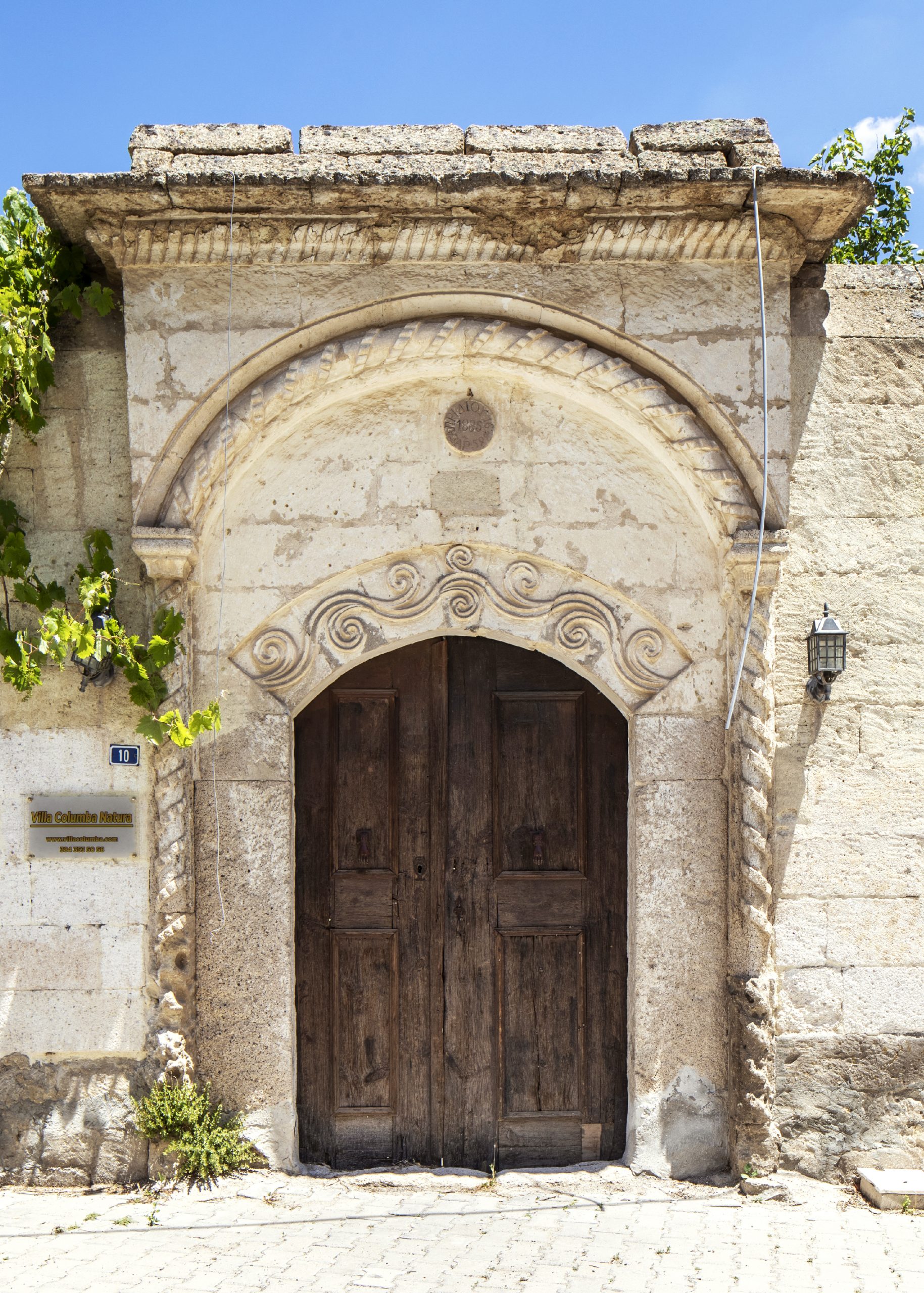 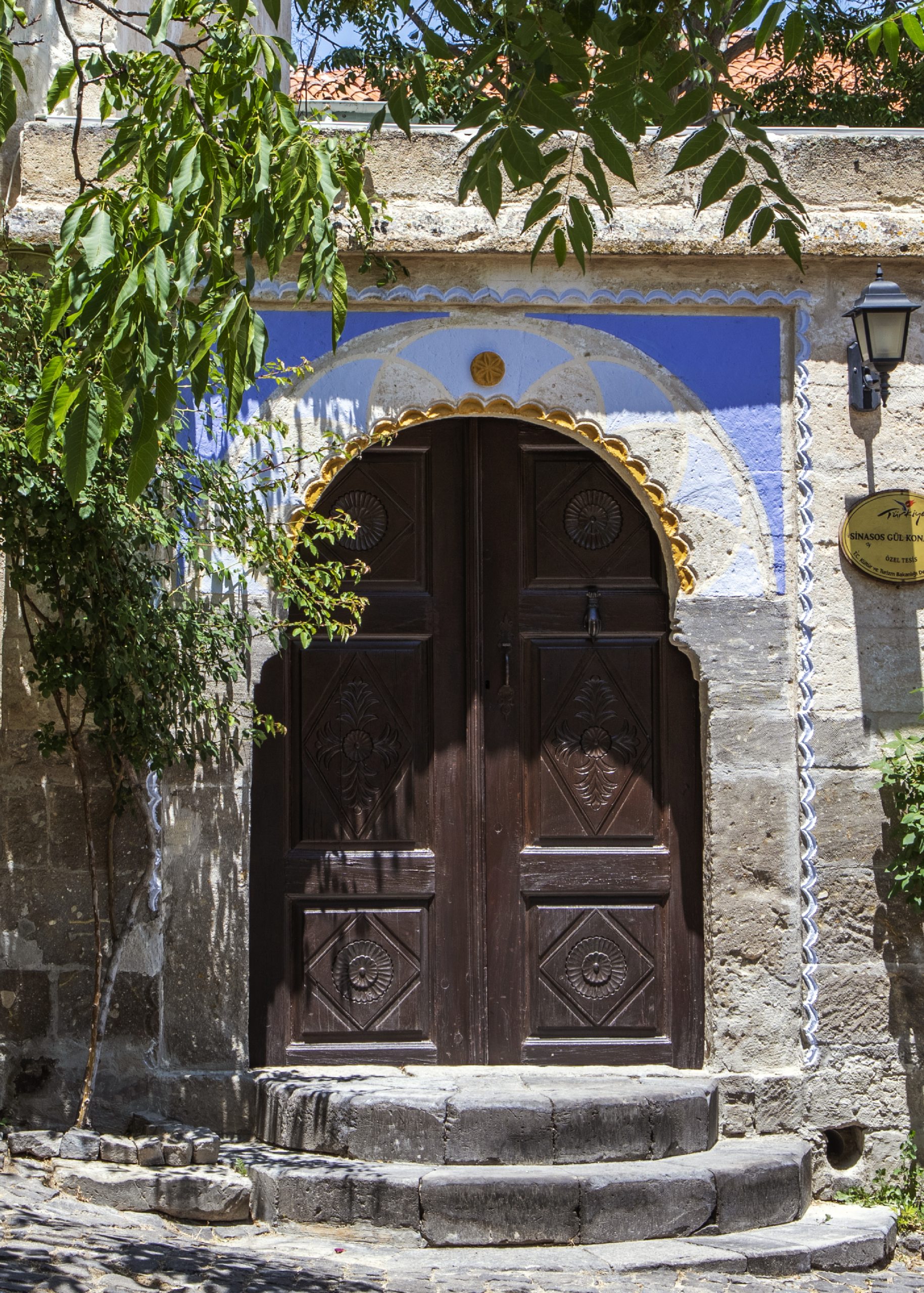 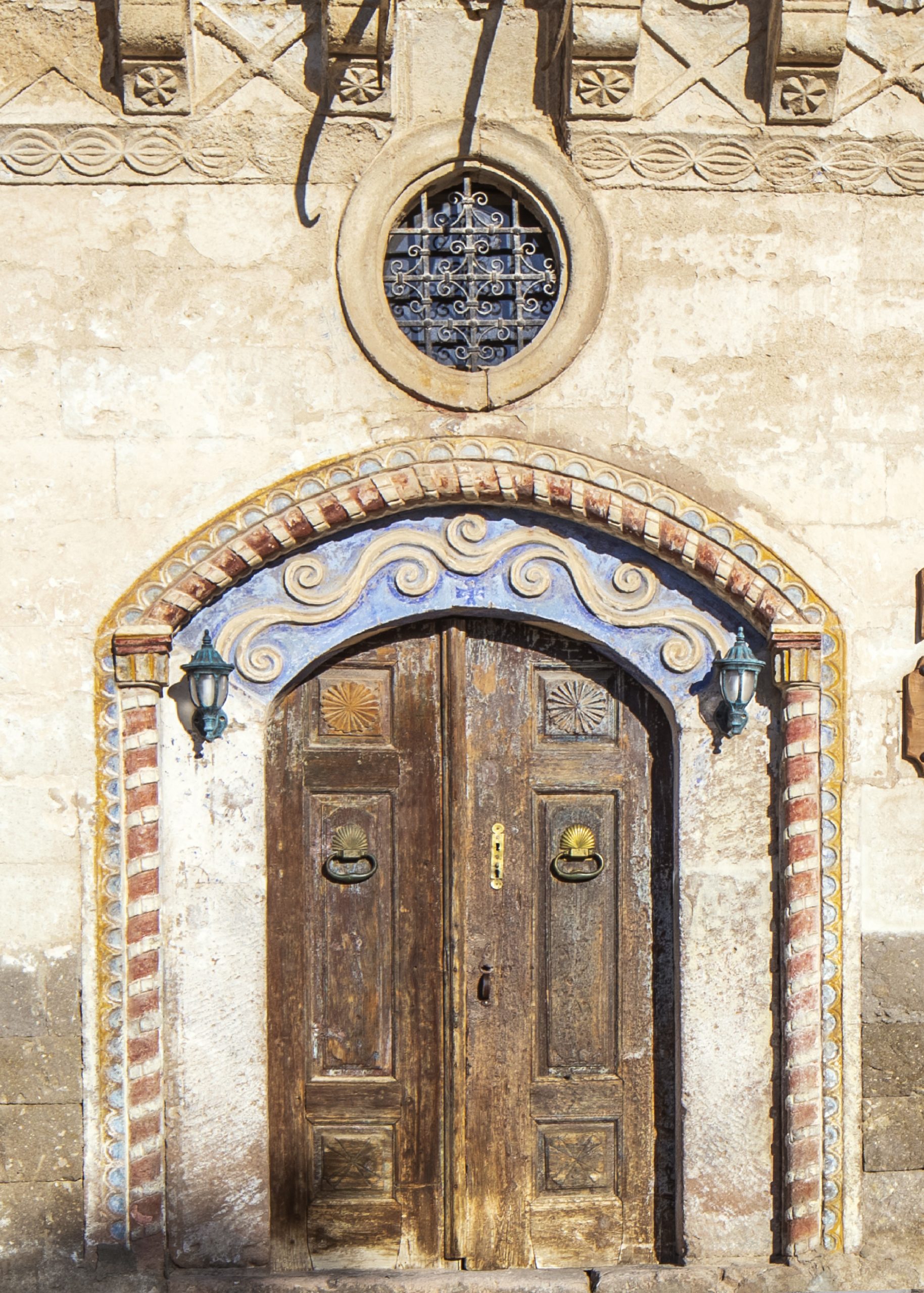 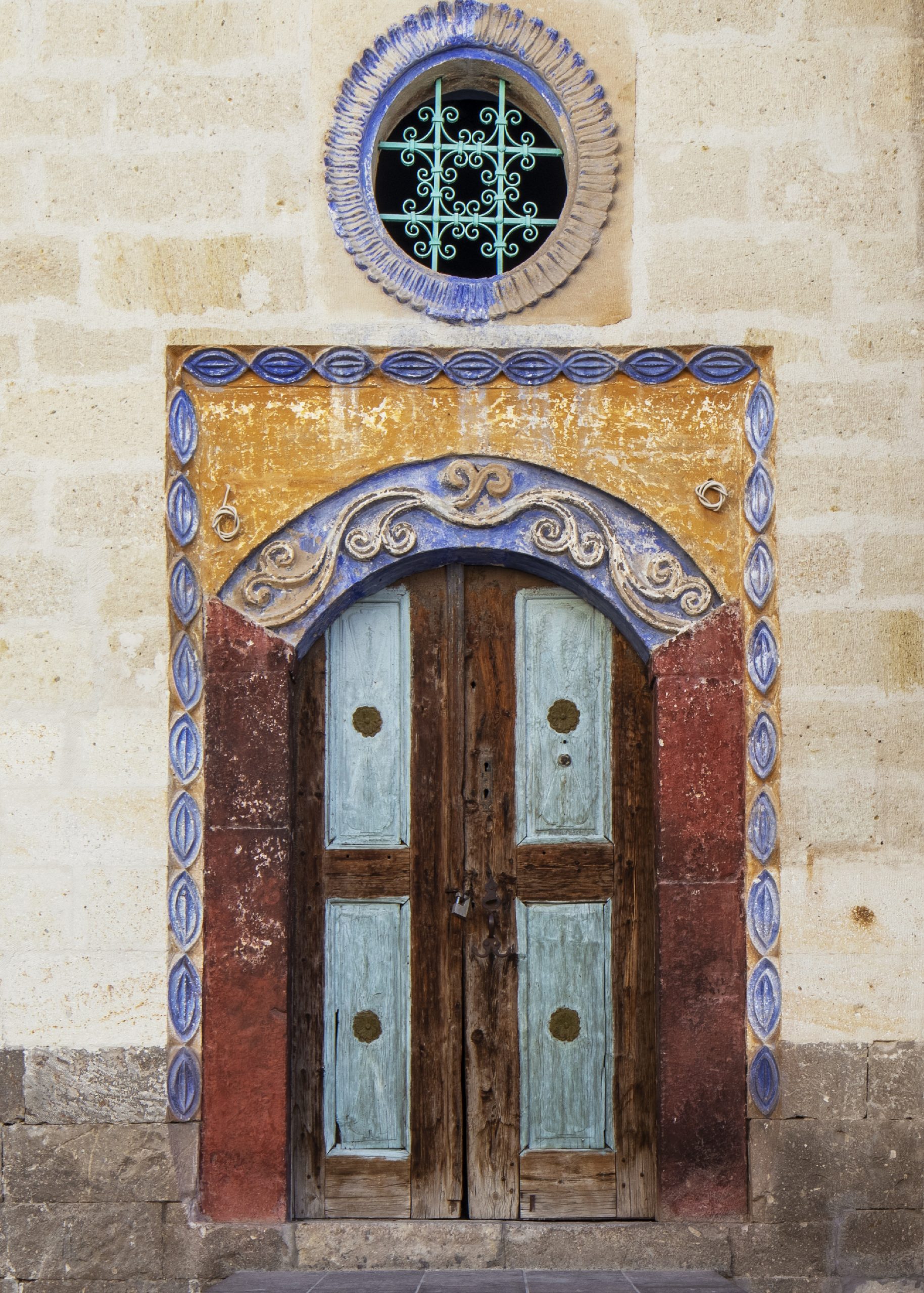 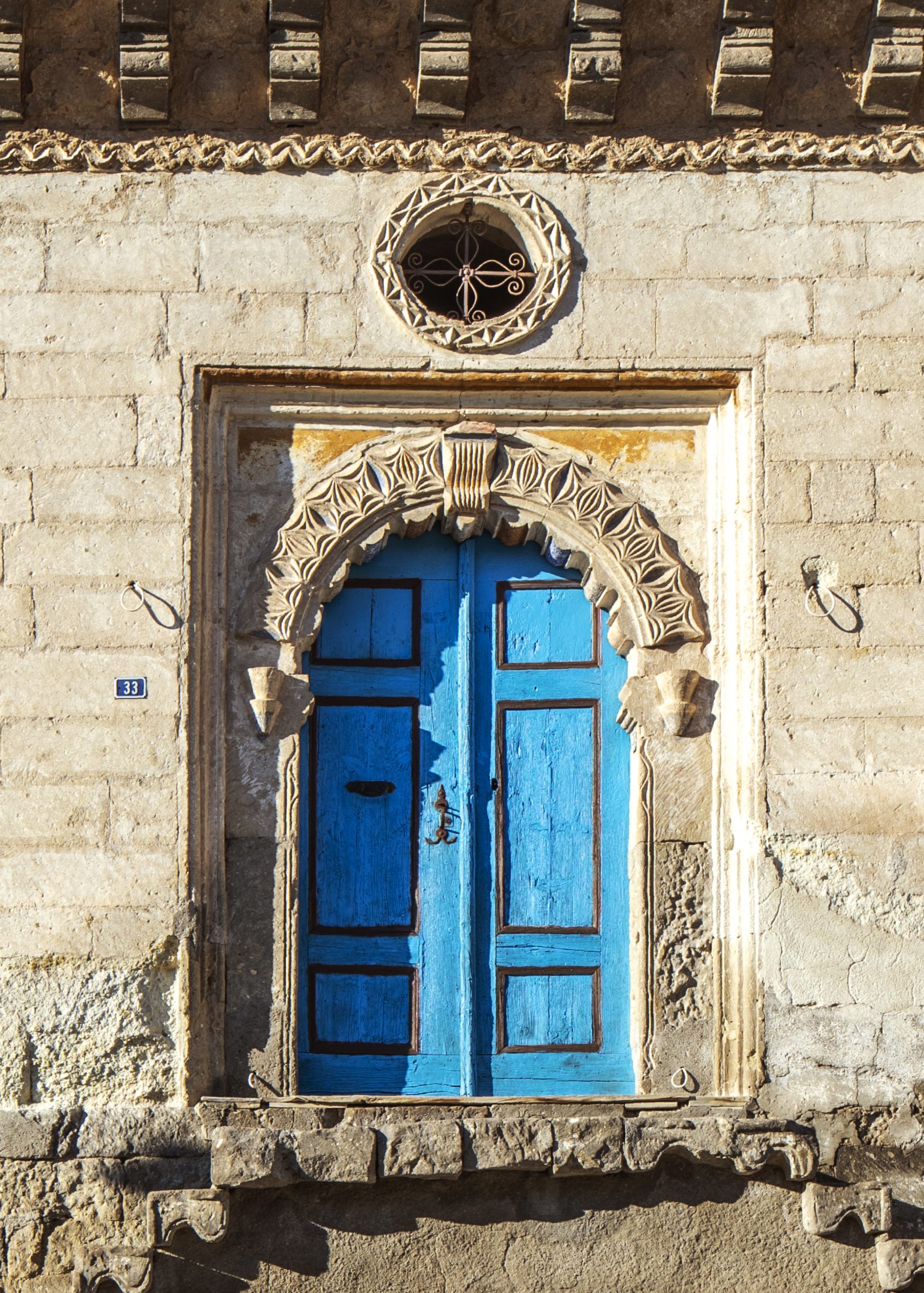 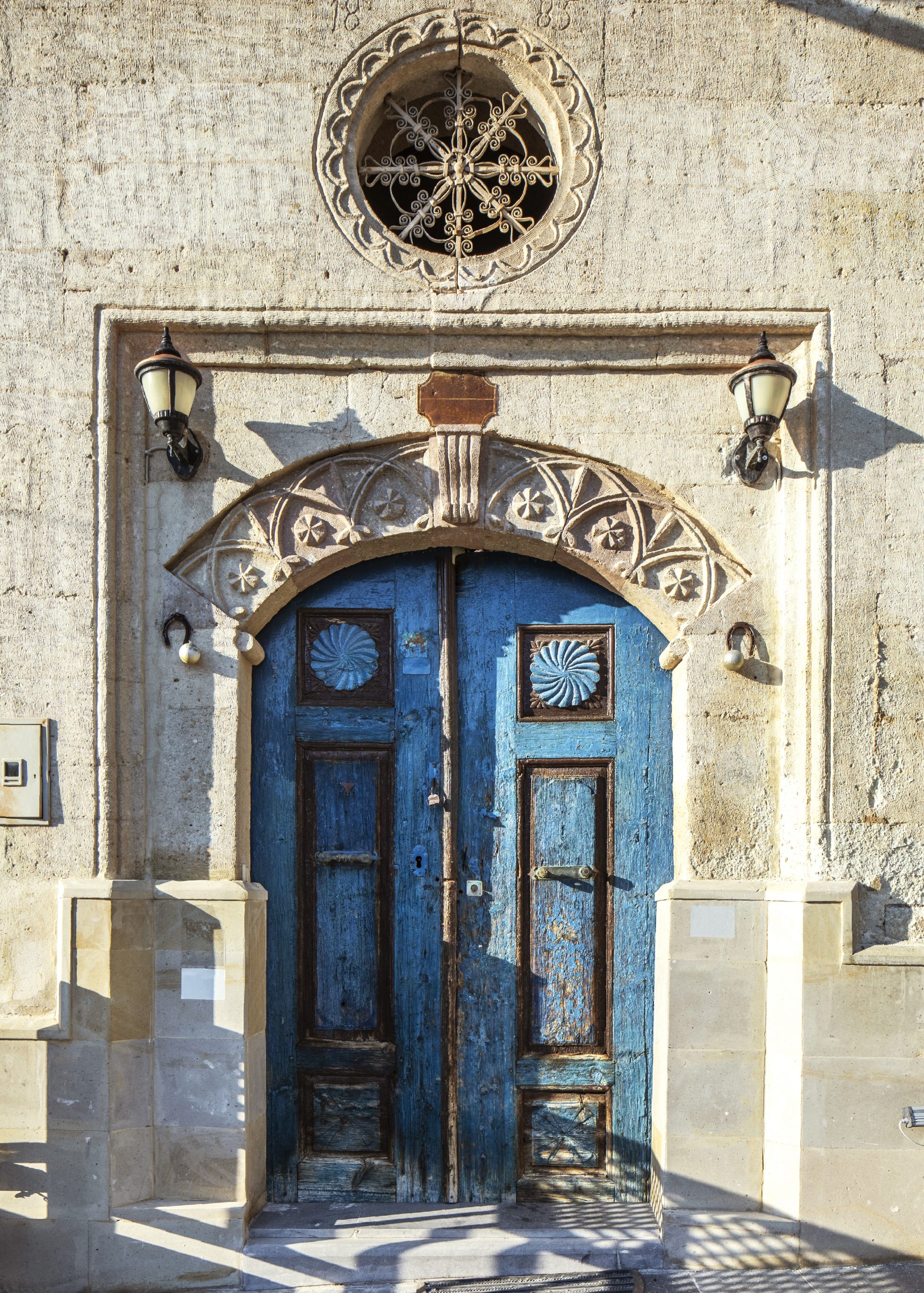 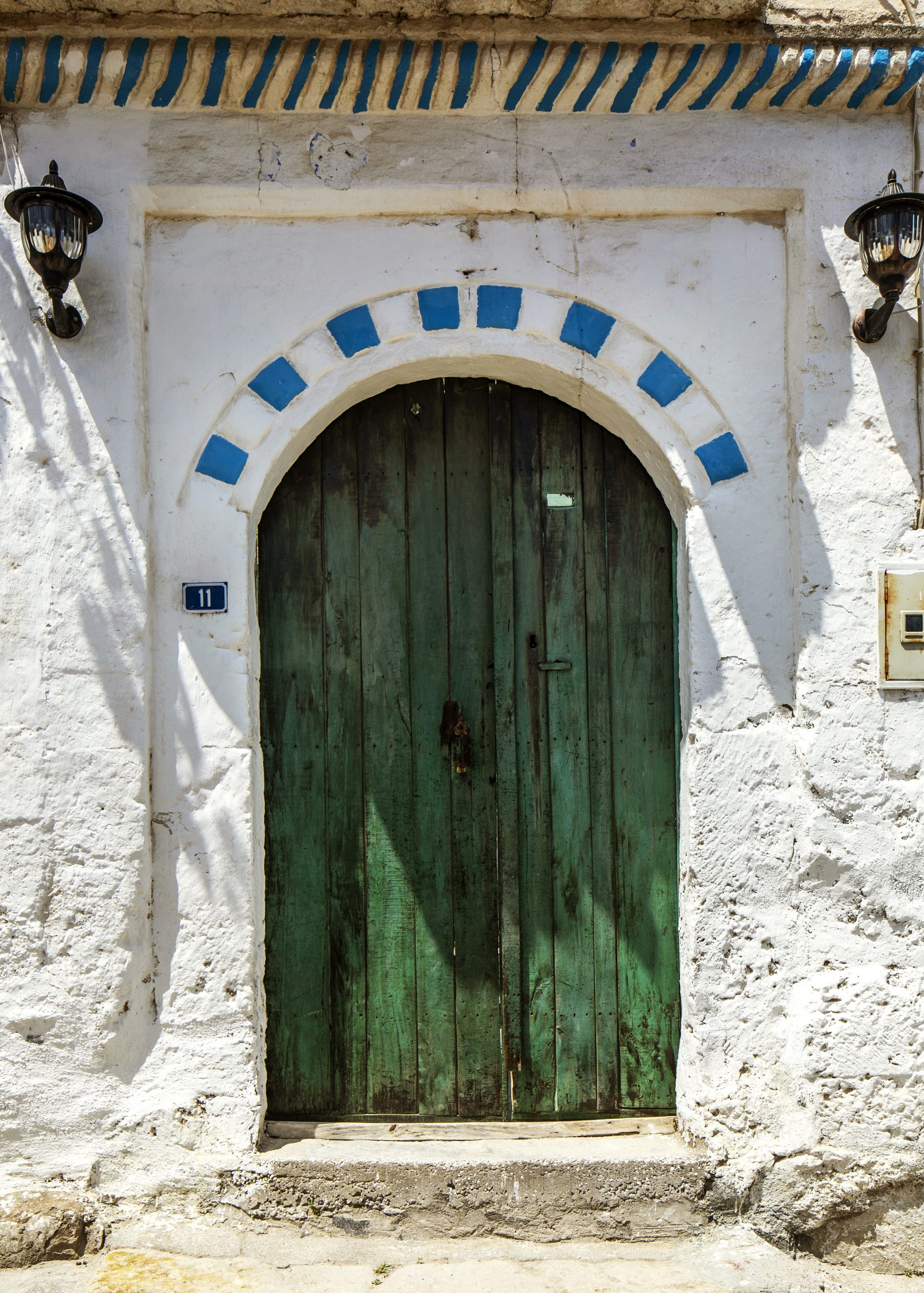 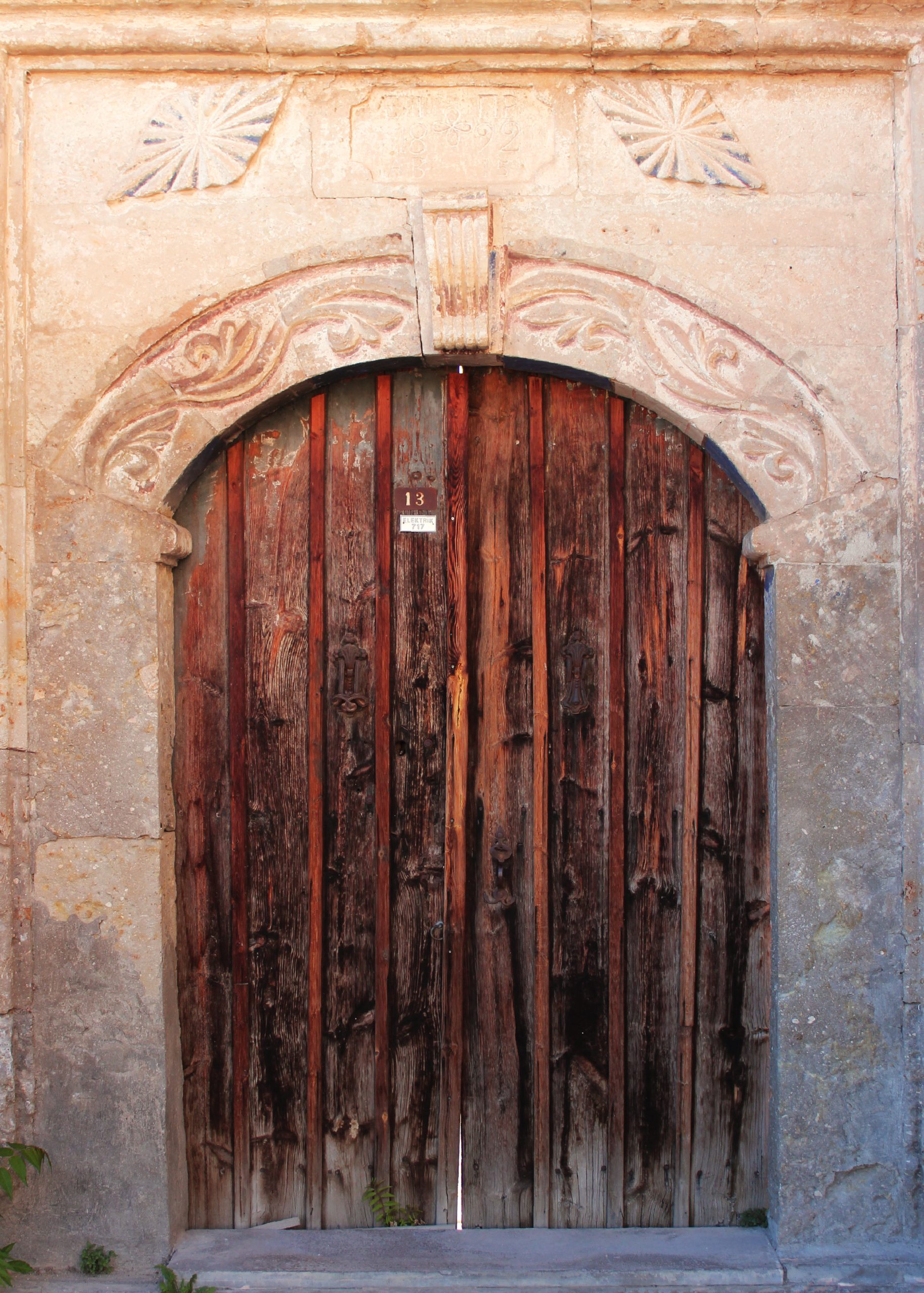 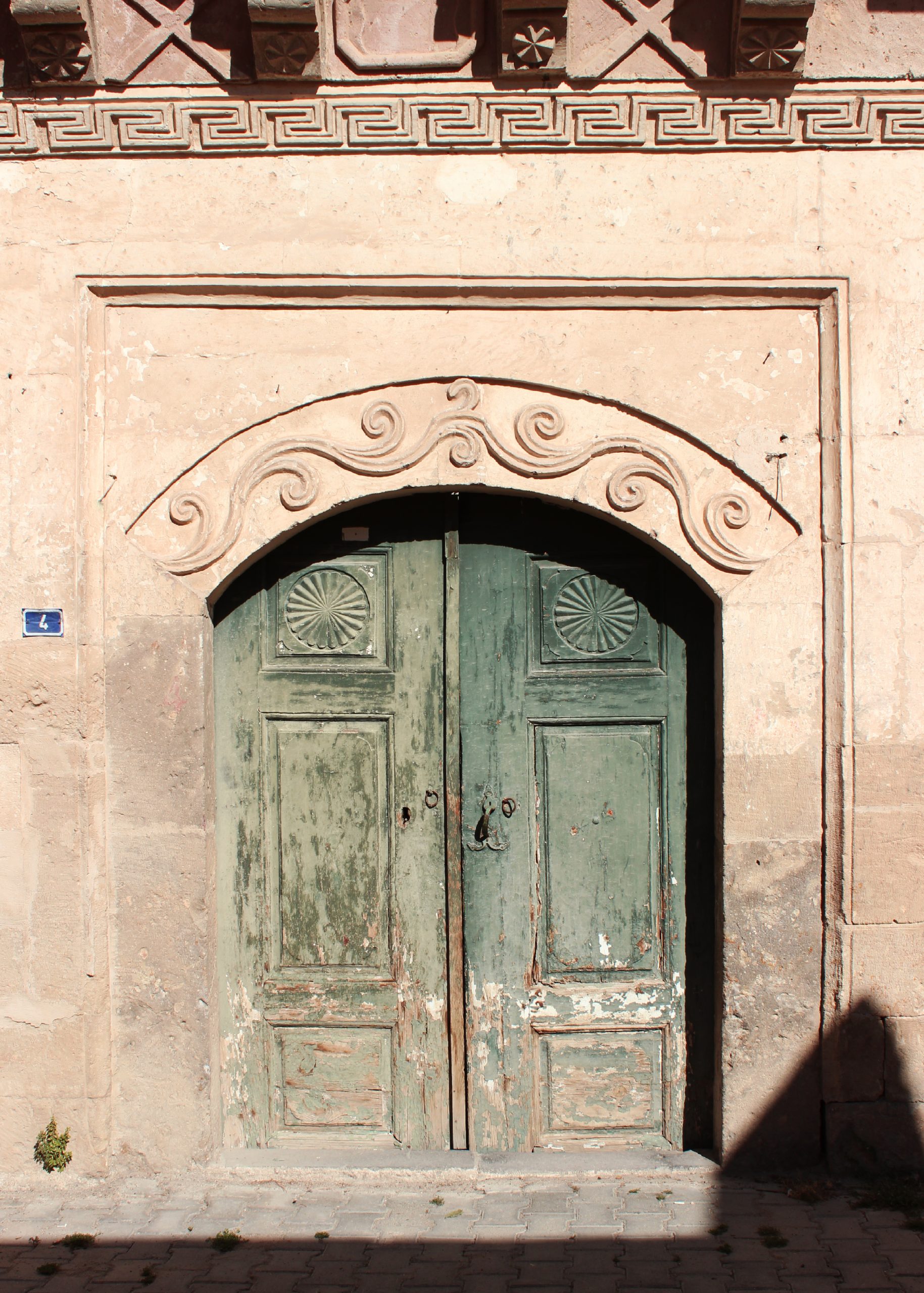 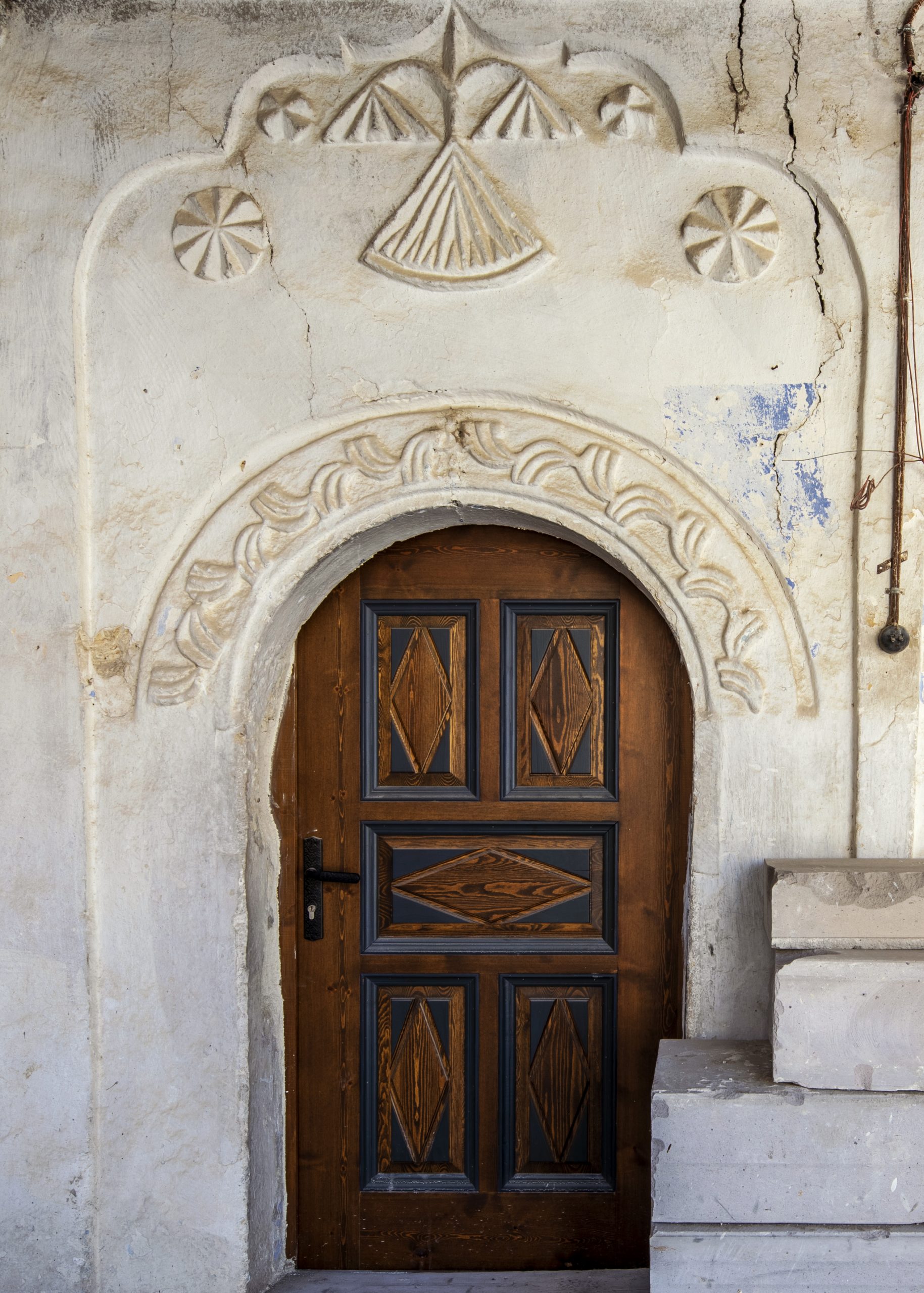 Doors are not only architectural structures providing the entrance and exit of a space, but also important building elements that contain some deep philosophical thoughts and symbolic meanings. Connecting inside with outside they carry a symbolism that gives clues about the life inside the space. The aesthetic aspect of them strengthens the symbolic meanings they carry.

Doors, which have always been important in architectural design in their historical processes, are one of the most significant architectural elements of the houses built in19th century.  This situation has undoubtedly changed in modern times in which functionality is prioritized. The monumentality emphasized in those older doors has now been replaced by much simpler designs.

As is known,19th and early 20th centuries were the most economically and culturally bright periods of the people of Sinasos, when the level of prosperity was highest.  This is directly related to a number of political developments during Late Ottoman Empire period that worked in favor of the non-Muslim people. Greeks of Sinasos, enriched by their commercial activities in Istanbul with the privileges that emerged with this process, returned to their hometowns and built themselves magnificent houses. Doors, one of the most important key elements reflecting the identity of the building, contributed greatly to this magnificence.

Most of the remarkable doors in Mustafapaşa appear in the main entrance of the houses built by the Greeks in the second half of 19th century. In addition, the door of Mehmet Şakir Pasha Madrasa, built by an Ottoman pasha at the end of 19th century, greets those coming to the village with a grandeur as if it had gathered all its splendor on its own.

The Doors of Sinasos

Although examples can be found in other places in Cappadocia, there are more monumental gates having been preserved in Mustafapaşa compared to others. Since all of these examples are from Ottoman period, they are identified with the name of the village during this period and are introduced as “Doors of Sinasos “.

Looking at the form of them, it is seen they are in the form of portals, designed to be the most prominent element of the external mass of the structure. The most common form on gates, the casings of which are wooden and double-wing and the rest of which are made of stone, are round and segmental arches. Although not as common as these, gates with flat arches are also encountered.

The decoration program of the historical gates in the village presents a diversity as in other architectural elements. Some of the gates have typical ornamental elements that reflect a certain style, such as a passion motif, as well as designs that reflect much different and personal tastes. It is not surprising that there is diversity in motifs and decorations in Anatolia, which have been home to different civilizations and religions and has a deep cultural background. Each of the monumental doors in Mustafapaşa, which projecting from the surface of the courtyard wall, is designed with a different composition than the other. The doors leading to the front are animated with moldings, reliefs of various forms in which stonework is integrated with artistic touches, as well as colonettes.

For example, the portal of Mehmet Sakir Pasha Madrasa was designed with a monumentality that is rarely seen in late Ottoman period. In addition to the lace-like embossing on the double-winged wooden door; its stepped arches, pillars and wall surface, adorned with vegetable and geometric reliefs, are all masterpieces of stone carving masters in the region. Even the inscription panel on gate is decorated and constructed independently within the decoration program.

Although it is located outside the border surrounding the original entrance door of Serafim Mansion, part of which serves as a hotel today, originally owned by the Rizos family, the lion reliefs that are part of the door decoration program are noteworthy. Undoubtedly this motif, an important ornamental element accompanying architectural structures, which we have encountered since the first civilizations in Mesopotamia and  Hittites in Anatolia, has an “apotropeic” feature.

In his work “Houses of Sinasos”, Roides notes that column capitals were not used on many of the gates in the village, noting that this was an important form element in different regions of Anatolia. Instead, he adds that arches and columns were used in Sinasos. At the same time, the researcher draws attention to the fact that although most of the magnificent houses in Sinasos were built by the Greeks, the triangular pediment, one of the most reflective elements of the Greek identity, was not applied much on facades of the houses (1985, pp. 151-152). Although he explains this lacuna mostly for technical reasons, this situation can be better explained by the fact that more of the villages are Anatolian villages with a rich cultural heritage.

A Way of Communication of the Ancients: The Knockers

Another striking feature of gates in Mustafapaşa is the doorknobs on doors designed during Ottoman period and many of which are unfortunately not in place today. These devices, which must have emerged under the influence of Europe, became widespread throughout the country in18th and 19th centuries during Ottoman period.

When we examine these door knockers we witness that in the past they functioned more than just an intermediary informing the person inside of the one entering the venue. Through the patterns, depictions and decorations designed on them, the host expressed her/his presence in the area where she/he lived. Thus, the doorknobs allowed the host to position herself/himself in the community as a whole. She/He attributed many characteristics such as economic status, social status, religious beliefs and worldview to symbols on them.