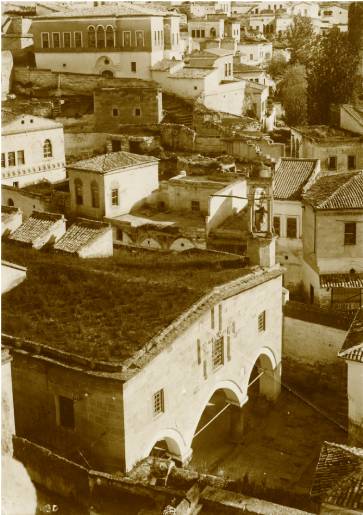 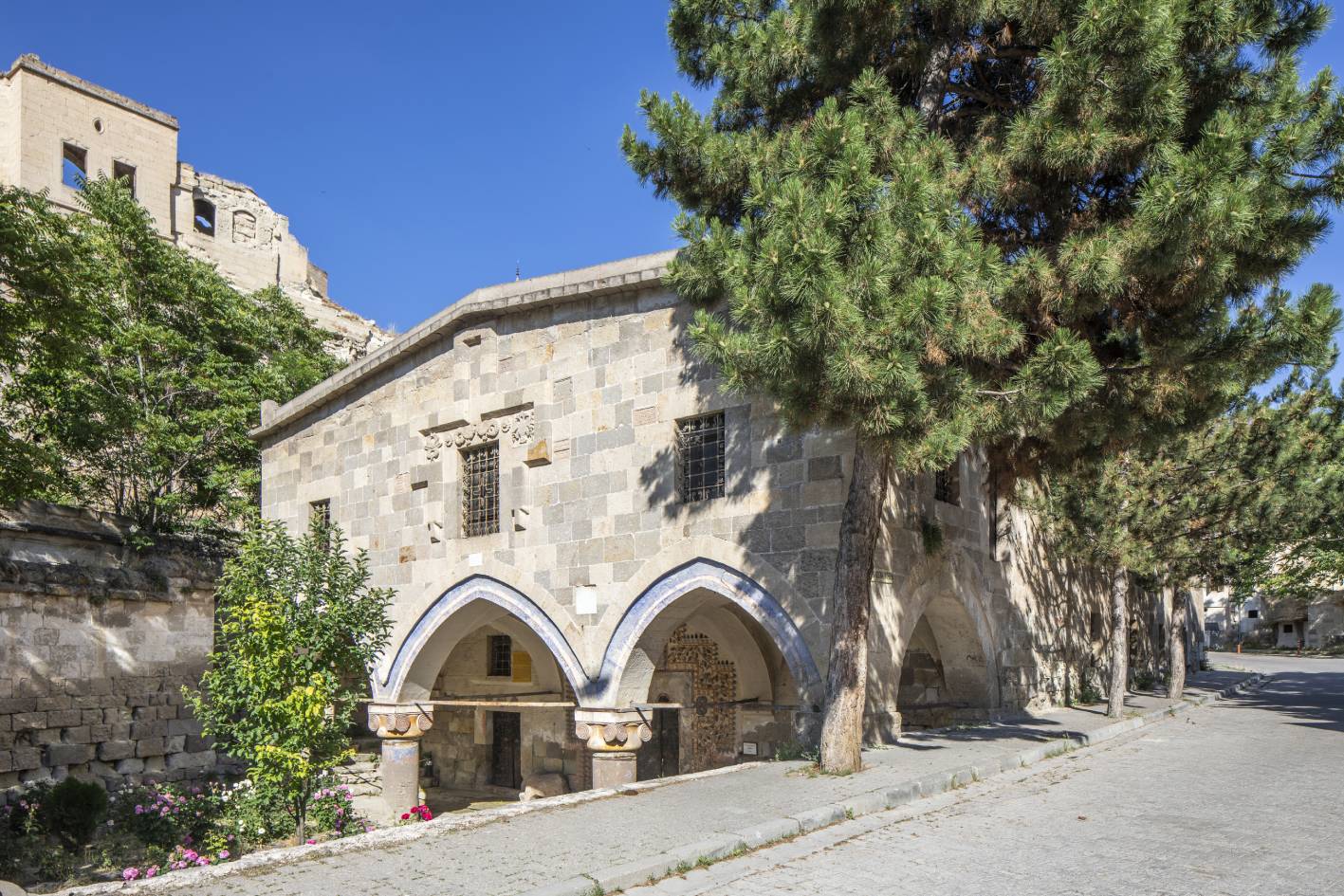 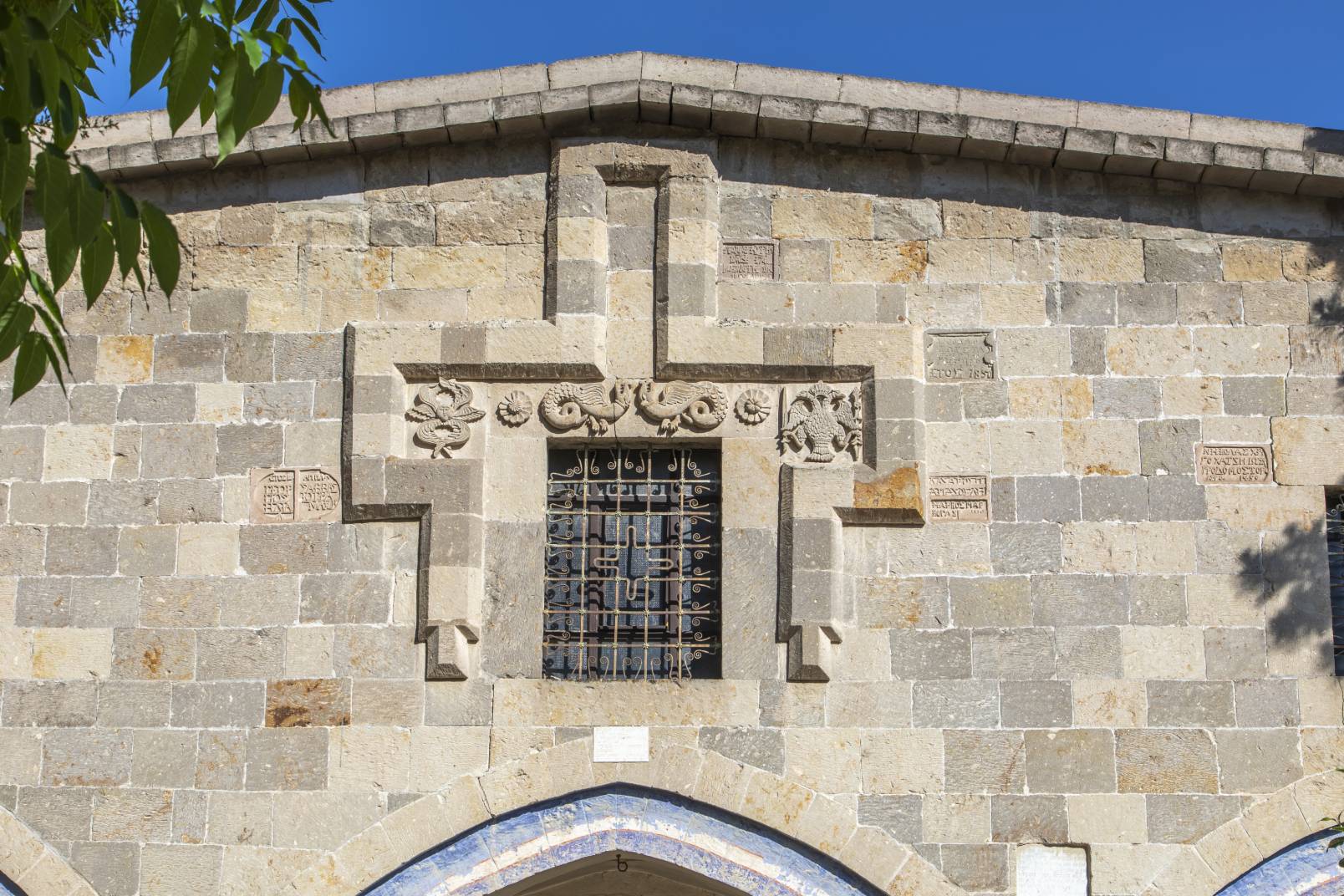 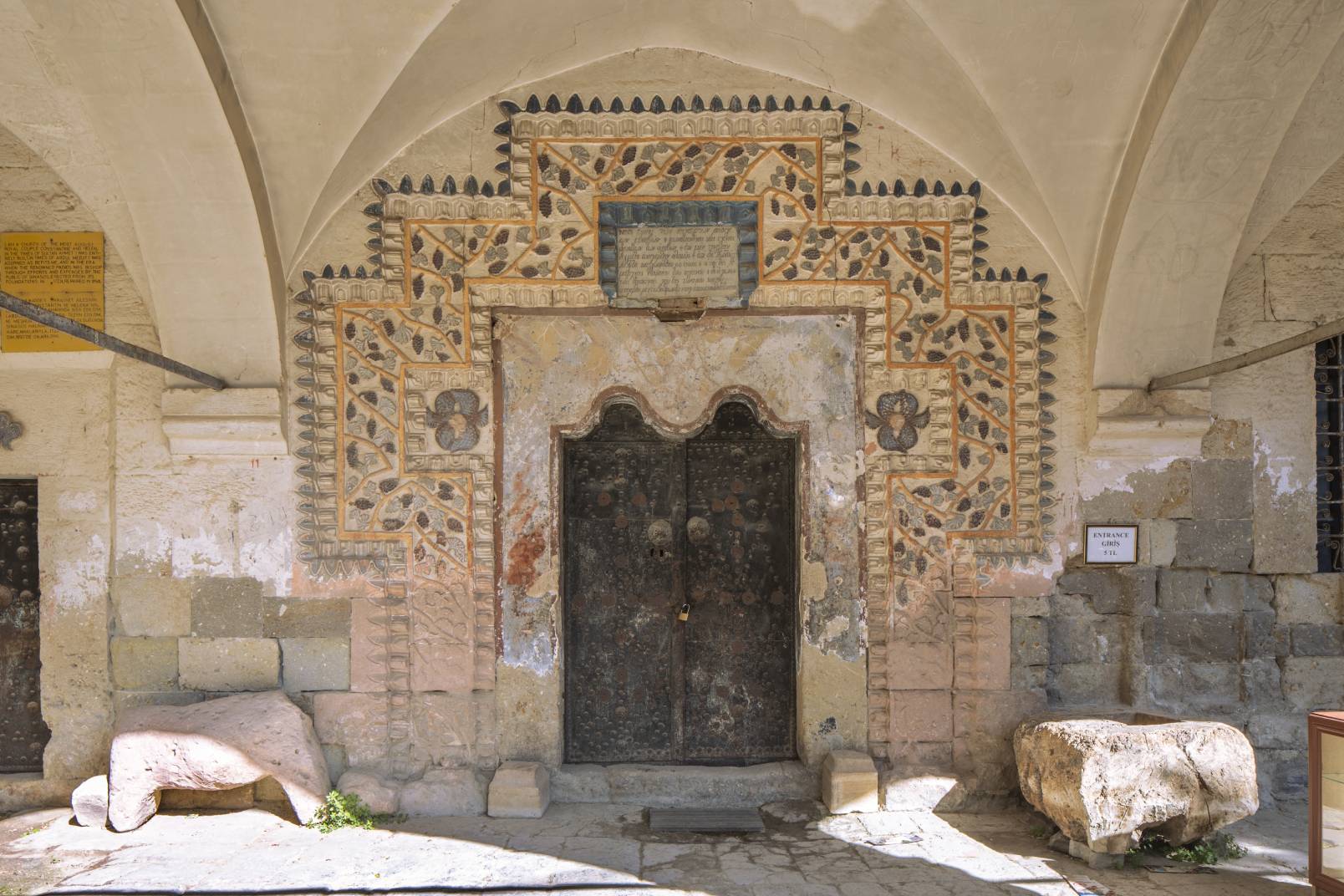 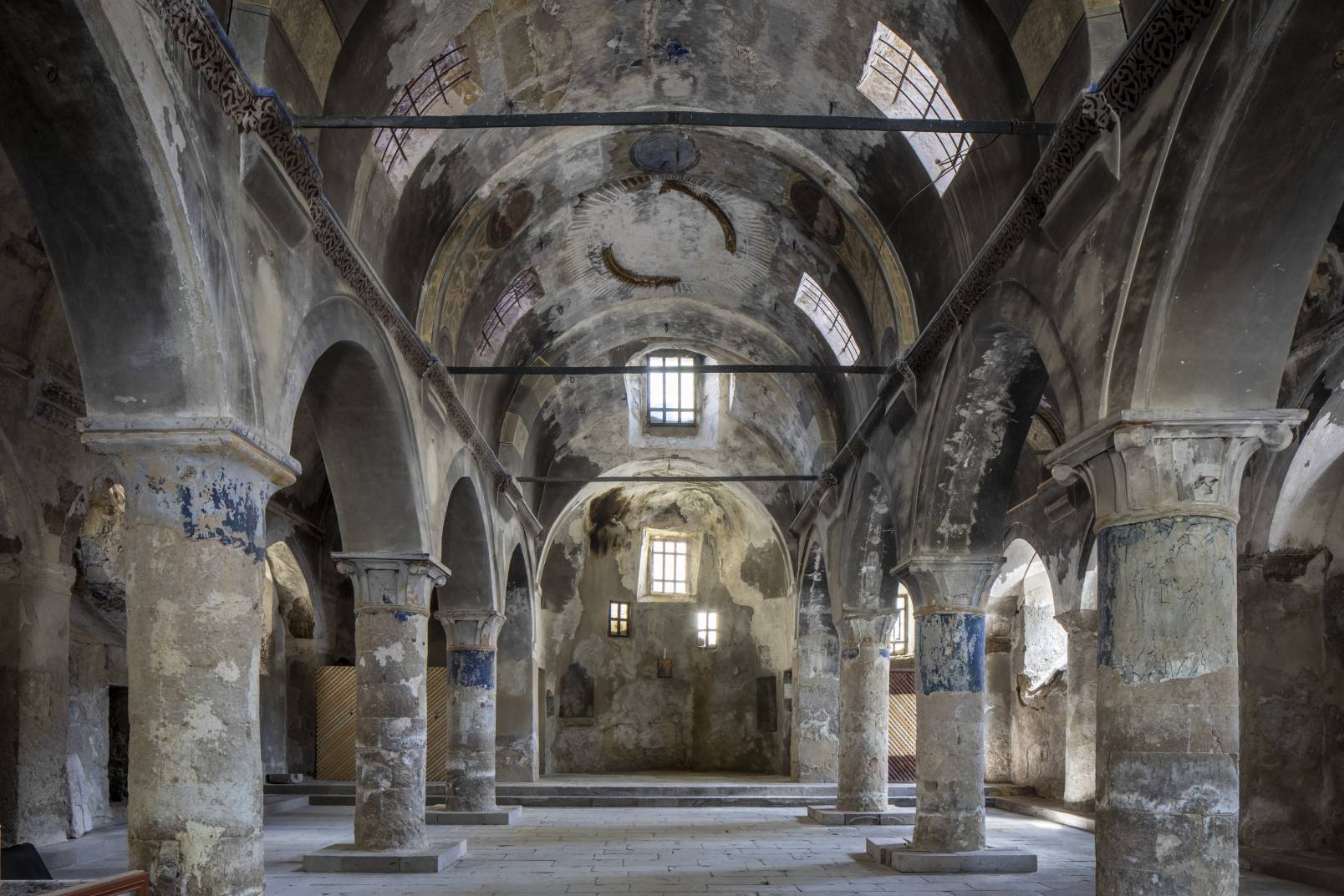 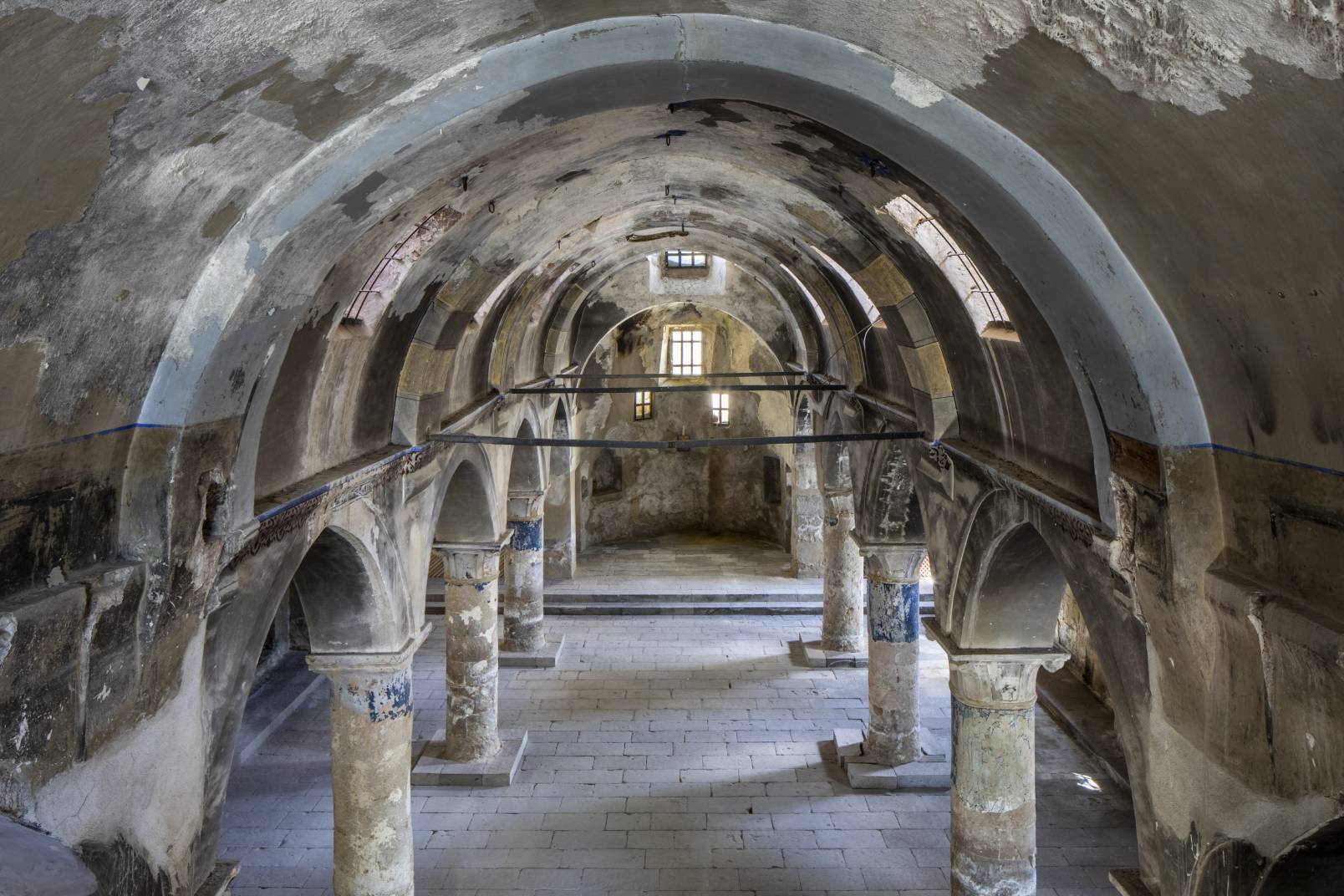 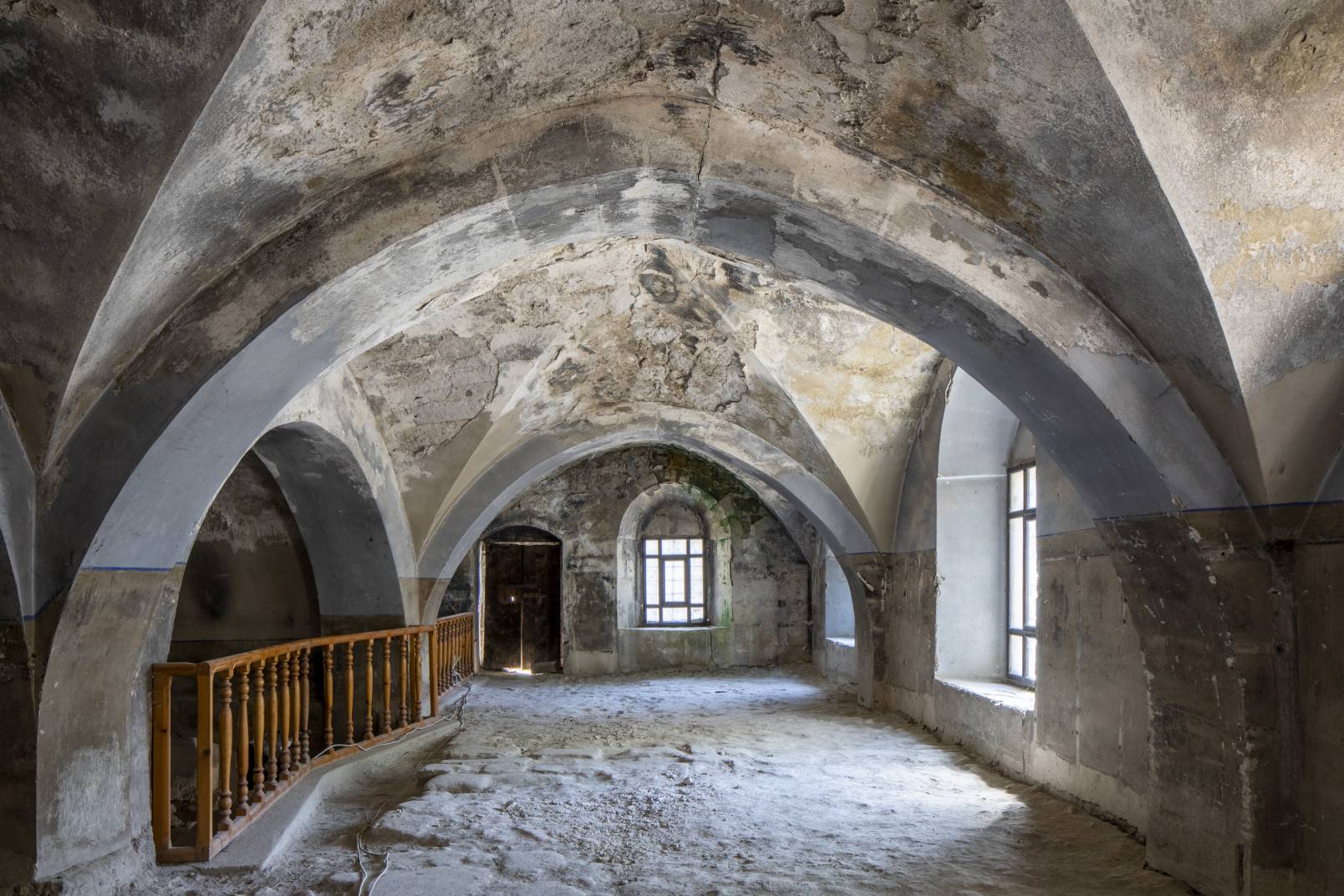 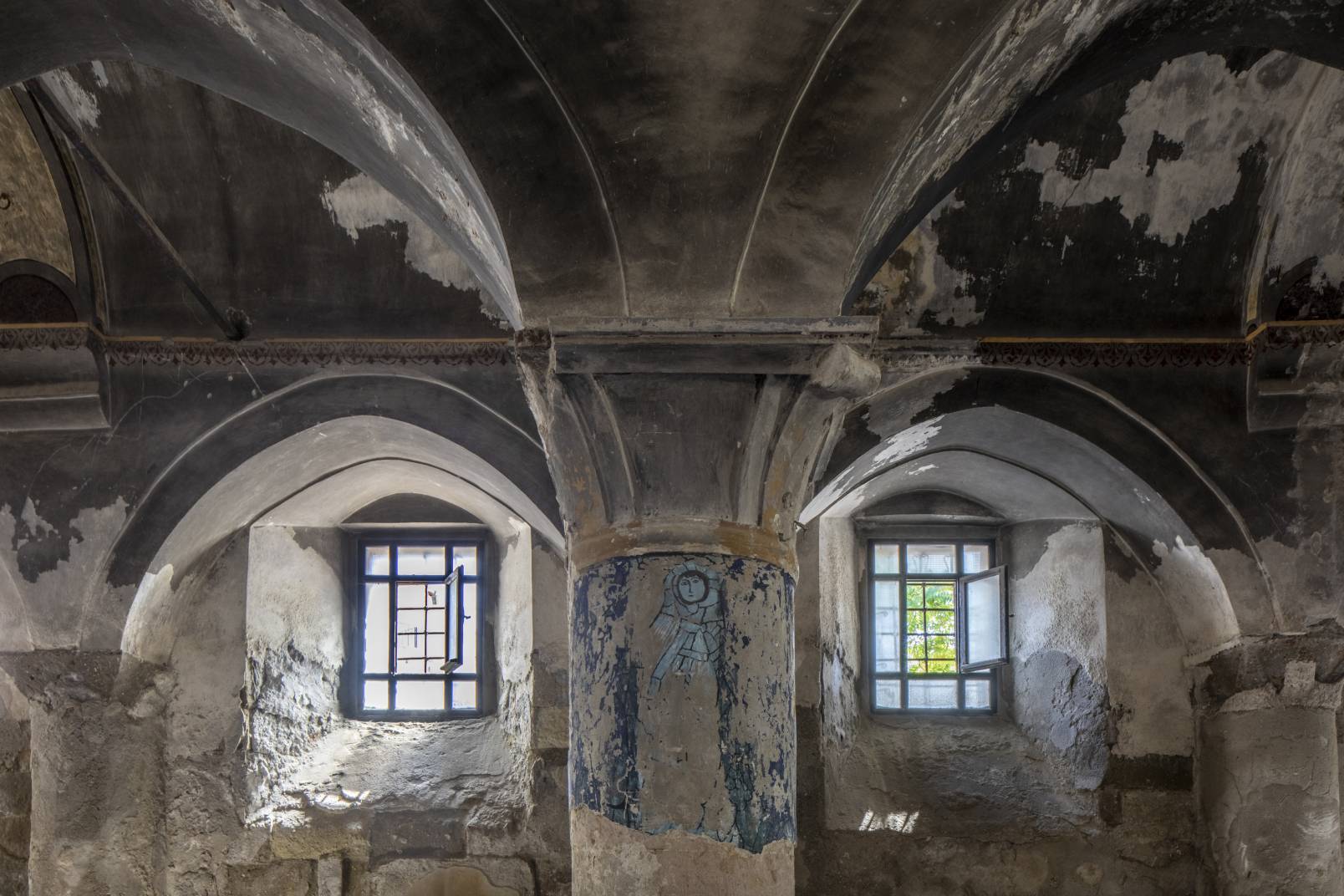 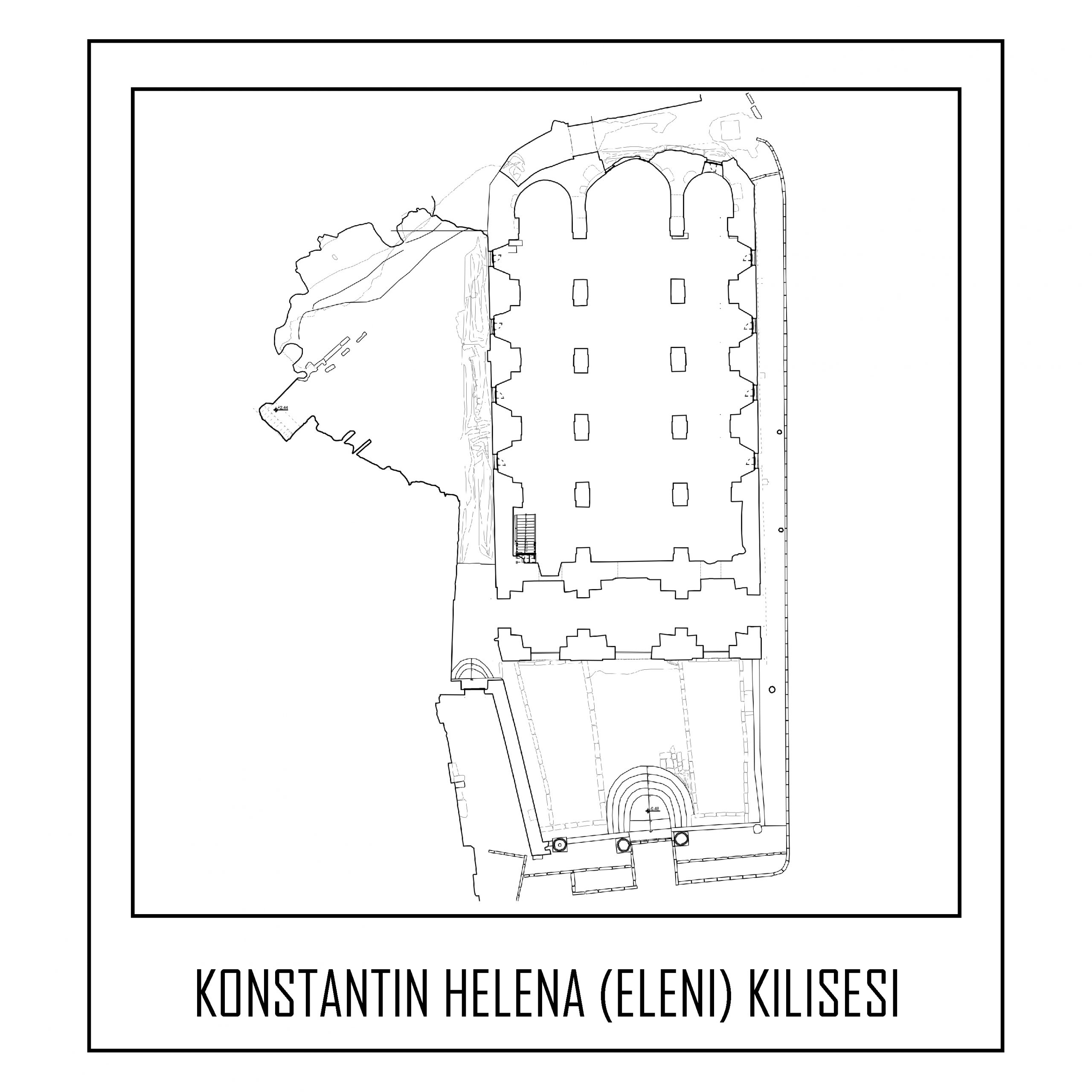 The Constantine and Helena (Eleni) Church, the most prominent church built during Ottoman period in Sinasos,  is located at the place that used to be the Marketplace before the population Exchange. The basilica planned church has a barrel vault, three naves and three apses, and there is an open courtyard on the west. Above the entrance door on the west face of the church, there is an eight-line inscription written on the marble stone in Greek letters. It was written from the mouth of the church in a way that no other example can be found in the region:

I am the temple of the faithful Constantine and Helena.

I was partially built during the reign of Sultan Ahmet.

I was decorated as necessary during the reign of Sultan Abdülmecid.

During the high priesthood of the famous Pasios,

With the struggle and expenditures of the Sinosos community,

I had been built from the foundations

Besides the yellow and dark blue plant and fruit motifs seen around the inscription, the geometric ornaments enhance the entrance. The upper part of the facade above the entrance door has three windows, with reliefs around the middle window. Two dragons are standing opposite each other with their heads raised in the middle, the angel Seraph on the left and the eagle figure on the right. On the other facades, the inscriptions of 1850 and 1851 were cut in relief. The interior southeast facade of the building is carved into the rock and opens to a space with a low ceilinged. In that space, people may have spent the night and prayed for healing. Stone material was used on the church walls, which was built with the masonry and carving technique, and wood and iron materials were used in the door, ceiling and window elements. Although there are traces of paint on the interior walls of the building, no figurative wall painting can be detected.

There are various legendary stories of the construction of the church. As it is known, Christians could not build new churches from 1453 (when Constantinope was conquered) until 1839, when the Tanzimat Edict granted Christian citizens the freedom to build churches. This information affects the story of the construction of the Constantine and Helena Church. According to a statement by Serafim Rizos, the church took its current form as follows: In the 1700s, there was a small church in the place where the church was located, and the church needed to be renovated. At that time, the Ottoman state gave the Christians eighty days to build their churches. However, with the efforts of the grandfather of Seraphim Rizos, known by the villagers as “Kara”, all the Christian people in the village mobilized to demolish the old church and build a new one. For the new church to be built, the people procured the necessary materials, and with an edict, the church was built in eighty days. In the 1850s, the church was repaired with the money collected by the villagers. The information from Serafim Rizos coincides with the inscription.

Besides Sunday rites and feasts, the church was also used for school events, ceremonies to welcome the bishop’s guests, prayers for the sultan’s health, or the army’s success. The church, which is open to visitors today, hosts various cultural and artistic events.